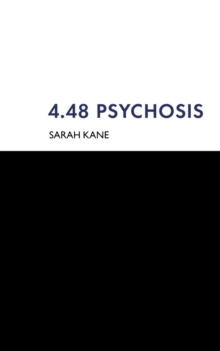 Product Description 4.48 Psychosis was written throughout the autumn and winter of 1998-99 as Kane battled with one of her recurrent bouts of depression. On February 20, 1999, aged 28, the playwright committed suicide. On the page, the piece looks like a poem. No characters are named, and even their number is unspecified. It could be a journey through one person's mind, or an interview between a doctor and his patient. Review â€œAs compact and beautiful as a diamond in structure--and yet the mood it inspires is as black as coal.â€ ? Time Out About the Author Sarah Kane (1971 â€“ 1999) was an English dramatist. She is best known for the extraordinary public controversy over Blasted, her first play which, like subsequent works from her, were shocking and defining moments in theater: explosive, theatrical, lyrical and laced with emotional power and bleak humor.