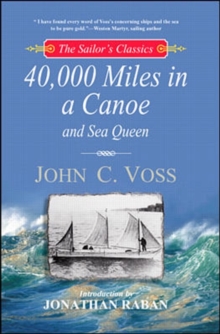 "I have found every word of Voss's concerning ships and the sea to be pure gold."--Weston Martyr, sailing author On May 27, 1901, Captain John C. Voss, accompanied by journalist Norman Luxton, put to sea in Tilikum, a thirty-eight-foot by five-foot dugout canoe purchased on Vancouver Island from Nootka Indians. Voss was a professional sailor who, like Joshua Slocum, had been idled in the twilight of commercial sail. Luxton, a nautical innocent, was along to record the voyage for posterity. Slocum's best-seller, Sailing Alone around the World, had been published the year before, and Voss and Luxton's goal was to make a name for themselves by circling the globe in a vessel smaller than Slocum's Spray. Drawing a mere 24 inches fully loaded, and outfitted by Voss with a deck, a small keel, three stubby masts, a cockpit for the helmsman, and a tiny cabin, the Tilikum was without doubt the oddest (and hence, the most newsworthy) craft ever to attempt a deep-sea voyage. Three years and several months later, on September 2, 1904, Tilikum arrived in England after a voyage of 40,000 miles--a journey fraught with perilous and exotic adventures on both land and sea. Luxton abandoned the voyage in the South Seas, and his replacement was lost overboard in a storm. Voss carried on, and in 1912 - 13, while in Japan, he wrote The Venturesome Voyages of Captain Voss, the book that established him alongside Slocum as one of the greatest small-boat navigators of all time.This volume in The Sailor's Classics restores in its entirety Captain Voss's account of his adventures in the Tilikum, together with the more noteworthy of the two remaining narratives in the original book, a truncated but epic voyage through a typhoon in the 19-foot yawl Sea Queen. In the words of series editor Jonathan Raban, "to possess this book is to have at your elbow your own compact fount of growling sea-wisdom, the classic primer on small-boat handling under all imaginable conditions." For sailors and armchair