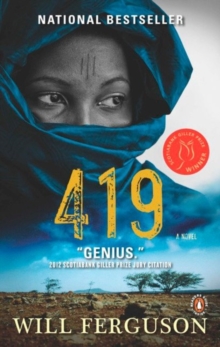 by: Ferguson, Will
Format: Paperback

Product Description From internationally bestselling travel writer Will Ferguson, author of Happinessâ„¢ and Spanish Fly, comes a novel both epic in its sweep and intimate in its portrayal of human endurance.A car tumbles through darkness down a snowy ravine. A woman without a name walks out of a dust storm in sub-Saharan Africa. And in the seething heat of Lagos City, a criminal cartel scours the Internet, looking for victims. Lives intersect. Worlds collide. And it all begins with a single email: â€œDear Sir, I am the daughter of a Nigerian diplomat, and I need your helpâ€¦â€ Will Ferguson takes readers deep into the labyrinth of lies that is â€œ419,â€ the worldâ€™s most insidious Internet scam. When Laura Curtis, a lonely editor in a cold northern city, discovers that her father has died because of one such swindle, she sets out to track downâ€”and cornerâ€”her fatherâ€™s killer. It is a dangerous game sheâ€™s playing, however, and the stakes are higher than she can ever imagine. Woven into Lauraâ€™s journey is a mysterious woman from the African Sahel with scars etched into her skin and a young man who finds himself caught up in a web of violence and deceit. And running through it, a dying fatherâ€™s final words: â€œYou, I love.â€ From Publishers Weekly Ferguson's African epic, which won Canada's Scotiabank Giller prize in 2012, details the linked lives of four individuals, three African and one Canadian, drawn together by Nigeria's bloody, exploited history. Laura seeks justice for her murdered father; amoral Winston chases wealth at any cost; Nnamdi and Amina seek only honest employment and a chance to raise Amina's child. Greed contends with generosity and vengeance with forgiveness in a world where the bad prosper and acts of charity are harshly punished. Despite the terrible events of the book, the author leaves room for hope of a better tomorrow. White North Americans grappling with the â‚¬Ëœmatter of Africa' is an often fraught affair, bright white teeth contrasted with chocolate skin, where tides of causeless violence wash across the hopeless continent and exoticized, sexualized natives exist solely to provide a supporting cast for white protagonists. Ferguson avoids many of the pitfalls of this genre; every terrible action has a motivation, Nigeria's present calamities have a historical and international context. Most importantly, Winston, Nnamdi and Amina do not exist merely to cast an edifying light on Laura, but, as she belatedly comes to appreciate, have inner lives, goals and ambitions of their own. Ferguson provides a template for novels about Africa other Western authors would do well to contemplate. Agent: Grainne Fox, Fletcher & Company. (Sept.) Review â€œ419 is more than a drugstore-rack police procedural: Itâ€™s a deeply ironic, thoroughly engaged politico-philosophical thriller from a comic writer best known for winning a trio of Leacock Awardsâ€¦. you wonâ€™t sleep until you finish, and then rest wonâ€™t come easily. Riveting. Provocative.â€ - The Globe and Mail â€œA sweeping story with complex twists and turns that spans continents, breaks hearts and ruins lives.â€ - The Chronicle-Herald (Halifax) â€œThe story [Ferguson] weaves is heart-wrenching, fascinating, and scary. A thriller with a raw nerve endingâ€¦. Ferguson â€¦ dazzles us in 419 with an intricately woven, urgent story. It is an unflinching, ambitious work, flinging us back and forth across the Atlantic, and taking us into dangerâ€¦. It is a persuasive work of fiction based on a very original premise. Ferguson who swings so deftly from humor to thriller is a writer who can genuinely surprise.â€ - Toronto Star â€œFergusonâ€™s revenge novel will appeal to everyoneâ€¦. A sprawling but beautiful third novel. It is a mixture of intrigue, storytelling, parenthood, sorrow, vengeance and fun. It reads a little bit like a Ludlum spy saga, a little bit like a Dickens character novel, a little bit like an Oscar-seeking movieâ€¦. [Ferguson] designed [419] as a page-turner. He succeeds fully.â€ - Winn