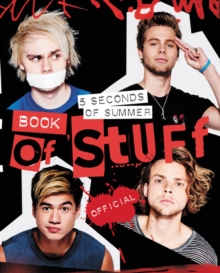 5 SECONDS OF SUMMER BOOK OF STUFF

by: 5 Seconds of Summer
Format: Paperback

Product Description To the very raucous 5SOSfamâ€”wanna find out what the band's been up to over the last year? Jam-packed with their own photos, anecdotes of life on and off the road, and much more, the only official 5 Seconds of Summer book out this year means now you can . . . Luke, Michael, Calum, and Ash are having a mad year: a world tour, writing their new album, signing up their first band on their own record label, breaking the internetâ€”it's been eventful to say the least. The good news is they want to share it all with you! This book is a special thanks for (officially) being the best fan army around! About the Author 5SOS, as they are affectionately referred to by their ever-burgeoning fan base, first met in the schoolyard in a small town in the western suburbs of Sydney, Australia. Luke (18), Mikey (19), Calum (19), and Ash (20) were brought together by a mutual love of pop-punk and the adrenaline-fueled super rock of turn-of-the-millennium America. They started posting videos on YouTube and within six months had amassed 50,000 Facebook fans, 100,000 Twitter followers, and more than 5 million YouTube views. The band relocated to London in September 2012 with one eye on world domination. Fast-forward eighteen months, and, having spent 2013 and 2014 touring the globe, 5SOS released their debut album, which immediately reached #1 on iTunes in 71 countries and topped charts around the world, including the US Billboard chart. With more than 1.5 million albums sold worldwide and total single track sales in the US alone surpassing two million, it's been a busy year for 5SOS.