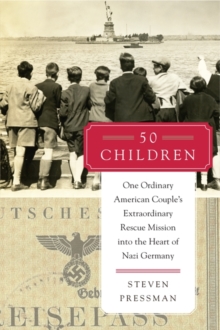 Product Description Based on the acclaimed HBO documentary, the astonishing true story of how one American couple transported fifty Jewish children from Nazi-occupied Austria to America in 1939â€”the single largest group of unaccompanied refugee children allowed into the United Statesâ€”for readers of In the Garden of Beasts and A Train in Winter. In early 1939, America's rigid immigration laws made it virtually impossible for European Jews to seek safe haven in the United States. As deep-seated anti-Semitism and isolationism gripped much of the country, neither President Roosevelt nor Congress rallied to their aid. Yet one brave Jewish couple from Philadelphia refused to silently stand by. Risking their own safety, Gilbert Kraus, a successful lawyer, and his stylish wife, Eleanor, traveled to Nazi-controlled Vienna and Berlin to save fifty Jewish children. Steven Pressman brought the Kraus's rescue mission to life in his acclaimed HBO documentary, 50 Children. In this book, he expands upon the story related in the hour-long film, offering additional historical detail and context to offer a rich, full portrait of this ordinary couple and their extraordinary actions. Drawing from Eleanor Kraus's unpublished memoir, rare historical documents, and interviews with more than a dozen of the surviving children, and illustrated with period photographs, archival materials, and memorabilia, 50 Children is a remarkable tale of personal courage and triumphant heroism that offers a fresh, unique insight into a critical period of history. Amazon.com Review An Amazon Best Book of the Month, May 2014: If you missed the highly praised HBO documentary 50 Children, you can get the whole story from this excellent chronicle by journalist Steven Pressman, who also wrote, directed, and produced the film. Gilbert and Eleanor Kraus were typical members of an affluent, educated Jewish community in Philadelphia in the 1930s; Gilbert was a lawyer, and Eleanor a bit of a shopaholic. Worried about what they were hearing from Europe by 1939, the Krauses set out to travel to Austria and Germany to save Jewish children from the advancing Nazis; they were not particularly religious or political and this was not an easy task in an era plagued by anti-Semitism and isolationism. But through careful readings of the law, loopholes in the visa-granting system, and plain old bravery, the Krauses managed to bring more than four dozen children to safety in the United States. Pressman, the Krausesâ€™ grandson-in-law, used Eleanor Krausâ€™s unpublished diaries as well as photographs, documents, and interviews to recreate a historical moment and a heroic act. Like Oskar Schindler and his list, the Krauses and their 50 children will now never be forgotten. --Sara Nelson From Booklist Rescues and escapes from Nazi persecution are augmented by this well-crafted account. Based on a family typescript inherited by Pressmanâ€™s wife, it describes a project taken on by her grandparents in 1939 to bring Jewish children out of Germany and to the U.S. Proposed to Gil Kraus, a Philadelphia lawyer, by a Jewish fraternal organization in which he was active, the plan entailed Kraus satisfying both American and German regulations and officialdom and ultimately traveling to Germany to select and chaperone 50 children across the Atlantic. His wife, Eleanor, wrote up her experience of the journey. Pressmanâ€™s extensive quotations of Eleanorâ€™s account capture the immediacy of events, while his research into State Department communications with the Krauses contextualizes the principal challenge they faced, finding a legal loophole in the then-restrictive immigration laws. On the other side of the transaction, Pressman details Gil Krausâ€™ activities in Berlin and Vienna to collect his charges, whose own memories of their rescue and relocation to America Pressman also relays. Multimedia marketing, including an HBO documentary, will heighten the prominence of this deserving work. --Gilbert Taylor