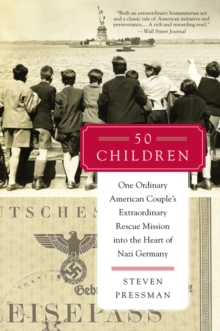 Product Description Two Ordinary Americans. Fifty Innocent Lives. One Unforgettable Journey. In early 1939, few Americans were thinking about the darkening storm clouds over Europe. Nor did they have much sympathy for the growing number of Jewish families who were increasingly threatened and brutalized by Adolf Hitler's policies in Germany and Austria. But one ordinary American couple decided that something had to be done. Despite overwhelming obstaclesâ€”both in Europe and in the United Statesâ€”Gilbert and Eleanor Kraus made a bold and unprecedented decision to travel into Nazi Germany in an effort to save a group of Jewish children. This is their story. Review â€œBoth an extraordinary humanitarian act and a classic tale of American initiative and perseverance....A rich and rewarding readâ€¦.Pressman paints a moving picture of the rescue.â€ ( Wall Street Journal) â€œExcellentâ€¦. Pressman, the Krausesâ€™ grandson-in-law, used Eleanor Krausâ€™s unpublished diaries as well as photographs, documents, and interviews to recreate a historical moment and a heroic act. Like Oskar Schindler and his list, the Krauses and their 50 children will now never be forgotten.â€ ( Sara Nelson, Amazon Best Book of the Month Citation) â€œA remarkable book.â€ ( Forbes) â€œThe astonishing story of a Philadelphia coupleâ€™s resolve to help bring Jewish children out of Nazi-occupied Austria. . . .With a careful eye to detail and dialogue, Pressman vividly re-creates this epic rescue.â€ ( Kirkus Reviews) â€œA brilliantly written book that takes the reader on a journey back in time. Yet, it is relevant today because Gil and Eleanorâ€™s story proves that individuals with courage and strength can overcome the odds. â€¦ A very insightful read.â€ ( Military Press) â€œ[A] stirring account of determination against overwhelming oddsâ€¦.[Pressmanâ€™s] flowing narrative breathes life into the America and Europe of 1938-1939,â€¦.The whole makes for a story as troubling as it is inspirational.â€ ( Publishers Weekly) â€œThe portrait of the Krauses that emerges is one of incredible resourcefulness, perseverance, bravery, and motivation to save lives. Pressmanâ€™s deeply affecting account is a tribute to a couple whose heroic efforts were a beacon of light during a time of unremitting darkness for the Jewish people.â€ ( Jewish Book Council) â€œWell-craftedâ€¦.[A] deserving work.â€ ( Booklist )â€œIt can be challenging to create suspense in a tale for which the ending is known. Pressman does a good job with 50 Children: One Ordinary American Coupleâ€™s Extraordinary Rescue Mission in the Heart of Nazi Germany, a book whose title pretty much tells it all.â€ (New York Journal of Books) About the Author Steven Pressman was a magazine and newspaper journalist for more than thirty years. He is the author of Outrageous Betrayal: The Dark Journey of Werner Erhard from est to Exile, and the writer, director, and producer of the HBO documentary film 50 Children: The Rescue Mission of Mr. and Mrs. Kraus.