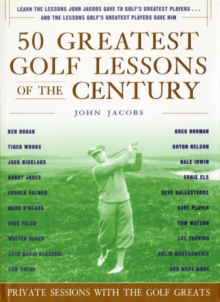 50 GREATEST GOLF LESSONS OF THE CENTURY: PRIVATE SESSIONS WITH THE GOLF GREATS

Product Description John Jacobs is one of the most respected golf teachers the game has ever known. Perhaps no one is better qualified than Jacobs to teach the greatest golf lessons of the 20th century because he has taught the greatest golfers of the 20th century. His reputation as an authority on the golf swing, with a sharp eye for detail and an uncanny talent for fixing faults, has made him a magnet for aspiring young stars as well as experienced champions. He is unique in having taught, studied, or played against (and often beaten) virtually every great golfer of the last 60 years. 50 Greatest Gold Lessons of the Centuryis a remarkable collection of personal anecdotes, expert swing analysis, and fascinating insights into what makes a champion and how these great players play the game. Jacobs reveals the lessons he has given to the golfing greats, recounts many of the great shots he has witnessed in tournament play, and highlights the secrets to their successful swings. The lessons come from a veritable Who's Who of golf, from legends such as Ben Hogan, Bobby Jones, Sam Snead, Jack Nicklaus, and Arnold Palmer, to the stars of today's PGA TOUR, such as Tiger Woods, Mark O'Meara, Greg Norman, Nick Faldo, and Ernie Els. Each lesson is complemented by specially commissioned artwork, as well as full-color action shots of today's players-plus rare, vintage photography that brings to life some of the greatest players of all time. Amazon.com Review , one of golf's most respected teachers, has either played against, talked with, or given a tip to just about every significant player in the last half of the 20th century. Combining his personal experience with an enormous knowledge of the game, he's assembled 50 important lessons--some general, some quite specific--offered alphabetically from (#1) how Seve Ballesteros relies on imagination in his shot-making to (#50) how Tiger Woods sets his eyes over the ball when putting. Jacobs addresses all parts of the game by using the mechanics and mental preparation of 34 pros--from old-timers like Henry Cotton and Harry Vardon to today's bright lights of the fairways. This is no mere tutorial, though. Through bios and photos of each player and lots of Jacobs's personal anecdotes, 50 Greatest Golf Lessons teaches the history and evolution of the golf swing with relevance to today. Better yet, for golfers who want to improve their games--and is there a golfer among us who doesn't?--Jacobs's complete analyses of each lesson come with important suggestions for how to take the lessons with you from the page right out to the golf course. --Jeff Silverman About the Author John Jacobs, the world-renowned golf coach, was the founder of the European Tour, the European Ryder Cup captain in 1979 and 1981, and was awarded an OBE in 1997. He is also cofounder of the John Jacobs Golf Schools. Excerpt. Â© Reprinted by permission. All rights reserved. John Jacobs: a lifetime in golf John Jacobs started his professional golfing life in his father's shop at Lindrick Golf Club in Yorkshire. He would stoke fires in the grate on Monday mornings to burn out snapped hickory shafts of clubs broken over the course of a weekend's play. He grew up to become one of golf's most influential figures. Tournament winner, founder of the PGA European Tour, Ryder Cup player and twice captain of the team, OBE and President of the PGA of Europe; his accolades and achievements are a tribute to his many gifts on and off the golf course. Above all, though, John is one of the most distinguished and experienced teachers the game of golf has ever known. He is a prolific and best-selling author and co-founder of the John Jacobs Golf Schools - currently the biggest and most successful golf schools in the world. His teaching methods have inspired millions of club golfers around the world and his keen eye for the swing, astute diagnosis and skilful way with words mean that for more than 5o years he has been constantly in demand