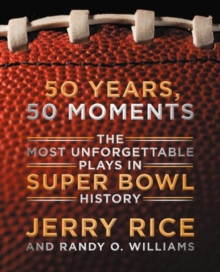 50 YEARS, 50 MOMENTS: THE MOST UNFORGETTABLE PLAYS IN SUPER BOWL HISTORY

Product Description In commemoration of the fiftieth anniversary of Americaâ€™s most beloved sporting eventâ€”the Super Bowlâ€”an authoritative collection of the most pivotal plays through the decades, compiled by the legendary Jerry Rice, and illustrated with dozens of color photographs. New York TimesÂ bestsellerÂ 50 Years, 50 Moments celebrates five decadesâ€™ worth of memories, insights, and personal experiences of Super Sunday. Super Bowl MVP Jerry Rice has compiled his list of the most iconic, strategic, and record-breaking moments in football history from the Super Bowlâ€™s inception to todayâ€”from the Green Bay Packers and Kansas City Chiefs in Super Bowl I; to the amazing Miami Dolphins championship in Super Bowl VII that capped their seventeen-game undefeated season; to the heart-stopping Super Bowl XXV in which the New York Giants beat the Buffalo Bills 20-19; and Super Bowl XLIXâ€™s amazing last-second victory by the New England Patriots over defending champion Seattle Seahawks 28-24. A Hall of Fame wide receiver who has played alongside and against some of the greatest players in the NFL, Jerry Rice, joined by accomplished sports researcher and journalist Randy O. Williams, draws on his intimate knowledge and insight of the game to highlight remarkable moments from this greatest game in modern sports. Riceâ€™s access to the NFL means that 50 Years, 50 Moments is chock full of memories and insights directly from the athletes and coaches who were involved in these moments. Pulling together all the catches, the interceptions, the fumbles and triumphant touchdowns that have made the Super Bowl an unforgettable experience. 50 Years, 50 Moments features marquee names like Joe Montana, Vince Lombardi, Roger Staubach, Walter â€œSweetnessâ€ Payton, Terry Bradshaw, Joe Namath, Lawrence Taylor, â€œMean Joeâ€ Greene, as well as Tom Brady and is a handsome must-have keepsake for football fans everywhere that is sure to be treasured for generations to come. From the Back Cover â€œIn compiling the facts and details for this book, Randy and I have had the pleasure of hearing stories from players, coaches, executives, and broadcasters, spanning six decades of great football. I learned more than I ever thought I would about the game I love.â€â€”Jerry Rice As a three-time Super Bowl winner and Super Bowl MVP, Jerry Rice has firsthand knowledge of what it takes to win championships. In this celebration of the biggest game in professional sports, Rice counts down the fifty greatest moments from the grand, fifty-year history of the Super Bowl. Through scores of first-person accounts from the players and coaches themselves, readers get new and intimate perspectives on unforgettable plays such as James Harrisonâ€™s 100-yard interception return for the Pittsburgh Steelers in Super Bowl XLIII, Butch Johnsonâ€™s diving touchdown catch for the Dallas Cowboys in Super Bowl XII, Denver Broncos quarterback John Elwayâ€™s â€œhelicopterâ€ dive in Super Bowl XXXII, and how the author himself served as a decoy on the game-winning touchdown that would cement the San Francisco 49ers as the team of the 1980s. Together with coauthor and veteran sportswriter Randy O. Williams, Rice also recounts the improbable moments when role players rose to heroic heights: When the Green Bay Packersâ€™ Max McGee came off the bench to catch the first touchdown in Super Bowl history; when a special teams player who almost didnâ€™t make the Super Bowl roster helped the New Orleans Saints change the tide of Super Bowl XLIV, and when a New England defensive back with one career start made a game-saving interception at the goal line in the final minute of Super Bowl XLIX. 50 Years, 50 Moments presents an intimate chronicle of the plays and players that won championships, forged dynasties, and changed the history of the NFL itself. About the Author Jerry Rice is a three-time Super Bowl champion and a member of the Pro Football Hall of Fame and College Football Hall of Fame. Generally regarded as the best