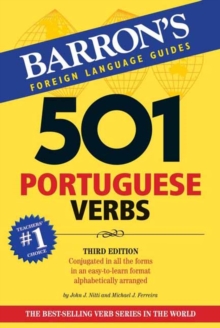 Product Description Barronâ€™s 501 Portuguese Verbs teaches you how to use the 501 most common and useful Portuguese verbs. Fluency starts with knowledge of verbs, and the authors provide clear, easy-to-use guidance. Each verb is listed alphabetically in easy-to-follow chart formâ€”one verb per page with its English translation. This comprehensive guide to is ideal for students, travelers, and adult learners. It includes: Conjugations in all persons and tenses, both active and passive A bilingual list of more than 1,250 additional Portuguese verbs Helpful expressions and idioms for travelers Verb drills and short practice sets with clear explanations Review of reflexive verb usage, object pronouns, passive voice, the progressive tense, and irregular past participle About the Author John J. Nitti earned a Ph.D. from the University of Wisconsin-Madison, where he was a professor of Spanish and Portuguese for more than fifteen years. His history with exploring Old Spanish lexicography led to major government funding from the U.S. and Spain, allowing him (along with his mentor, Lloyd Kasten) to devise innovative ways to bring computing to bear on the Old Spanish Dictionary project, which the Wisconsin Seminary of Medieval Spanish Studies had been at work on since the 1930s. In addition to his directorship of the Old Spanish Dictionary project (1975â€“2001), Nitti and Kasten founded the Hispanic Seminary of Medieval Studies (HSMS), initially to disseminate the large numbers of transcripts and other materials that the dictionary project was producing. Today, this nonprofit organization become an important publisher of texts in Hispanomedievalism and related fields. Born in Manhattan, New York, and raised in Rio de Janeiro, Brazil, Michael Ferreira received his doctoral degree in Hispanic Philology and Linguistics and his M.A. in Luso-Brazilian Literature from the University of Wisconsin-Madison. Dr. Ferreira is an associate professor and director of the Portuguese language program in the Department of Spanish and Portuguese at Georgetown University. He also teaches in the Center for Latin American Studies in the School of Foreign Service. He has edited and transcribed several Old and Early Portuguese texts, and currently is the director of the Dictionary of the Old Portuguese Language Project. He has taught workshops in Portugal and Brazil on paleography, electronic transcription and edition of Old Portuguese texts, as well as computer-based lexicography techniques.