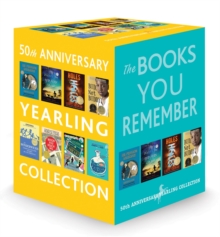 Product Description Eight childrenâ€™s classics from yesterday and today together in a collectible box set! Celebrate the fiftieth anniversary of â€œthe imprint that has set the standard for childrenâ€™s trade paperback publishing.â€ Â  The books you remember and the stories you'll never forget come together in a collectible box set in honor of the Yearling imprintâ€™s fiftieth anniversary. The box set features: The Phantom TollboothÂ by Norton Juster Where the Red Fern GrowsÂ by Wilson Rawls HolesÂ by Louis Sachar Bud, Not BuddyÂ by Christopher Paul Curtis The PenderwicksÂ by Jeanne Birdsall When You Reach MeÂ by Rebecca Stead Escape from Mr. Lemoncello's LibraryÂ by Chris Grabenstein The Fourteenth GoldfishÂ by Jennifer L. Holm Â  Together, the books have won three Newbery Medals, one National Book Award, one Coretta Scott King Award, countless state awards, and numerous spots on bestseller lists. It's the classics of yesterday and today, and the memories of tomorrow. Review SELECT PRAISE AND ACCOLADES FOR INCLUDED TITLES: The Phantom Tollbooth "You loved the humor and adventure as a kid, but read this novel again as an adult, and you'll marvel at its wit, complexity, and its understanding of how children perceive the passage of time." --Entertainment Weekly Where the Red Fern GrowsÂ  "One of the great classics of children's literature." --Common Sense Media HolesÂ  Newbery Medal Winner National Book Award Winner #1 New York Times Bestseller Bud, Not BuddyÂ  Newbery Medal Winner Winner of the Coretta Scott King Award The Penderwicks National Book Award Winner New York Times Bestseller When You Reach Me Newbery Medal Winner New York Times Bestseller Escape from Mr. Lemoncello's Library Nominated for 37 state awards. . . and counting! New York Times Bestseller The Fourteenth Goldfish Nominated for 15 state awards. . . and counting! New York Times Bestseller About the Author NORTON JUSTERÂ is the author of a number of highly acclaimed childrenâ€™s books, including The Phantom Tollbooth, which The New Yorker called a "classic," and The Dot and the Line, which was made into an Academy Awardâ€“winning film.Â  WILSON RAWLSÂ is the author of Where the Red Fern Grows and Summer of the Monkeys. Since its publication more than fifty years ago, Where the Red Fern Grows has assumed the status of a classic and has been made into a widely acclaimed motion picture. LOUIS SACHARÂ is the author of the #1 New York Times bestseller Holes, which won the Newbery Medal, the National Book Award, and the Christopher Award. His latest book for young readers is the New York Times bestseller Fuzzy Mud. CHRISTOPHER PAUL CURTIS is the bestselling author of Bud, Not Buddy, winner of the Newbery Medal and the Coretta Scott King Award, among other honors. His first novel, The Watsons Go to Birmingham--1963, was also singled out for many awards, among them a Newbery Honor and a Coretta Scott King Honor.Â  JEANNE BIRDSALLÂ is the New York Times bestselling and National Book Award-winning author of the Penderwicks series, which includes The Penderwicks, The Penderwicks on Gardam Street, The Penderwicks at Point Mouette, and The Penderwicks in Spring. REBECCA STEAD isÂ the author of When You Reach Me, which was a New York Times bestseller and winner of the Newbery Medal and the Boston Globeâ€“Horn Book Award for Fiction, and Liar & Spy, which was also a New York Times bestseller, won the Guardian Prize for Childrenâ€™s Fiction, and was on multiple state master lists and best of the year lists. She is also the author of First Light, which was nominated for many state awards.Â  CHRIS GRABENSTEINÂ is the #1 New York Times bestselling author of Escape from Mr. Lemoncello's Library, Mr. Lemoncello's Library Olympics, and The Island of Dr. Libris. He has also coauthored numerous page-turners with James Patterson, including the I Funny, House of Robots, and Treasure Hunters series, and Jacky Ha-Ha. Look for his latest hilarious novel, Welcom