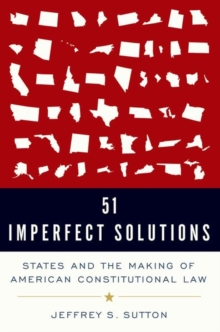 51 IMPERFECT SOLUTIONS: STATES AND THE MAKING OF AMERICAN CONSTITUTIONAL LAW

Product Description When we think of constitutional law, we invariably think of the United States Supreme Court and the federal court system. Yet much of our constitutional law is not made at the federal level. In 51 Imperfect Solutions, U.S. Court of Appeals Judge Jeffrey S. Sutton argues that American Constitutional Law should account for the role of the state courts and state constitutions, together with the federal courts and the federal constitution, in protecting individual liberties. The book tells four stories that arise in four different areas of constitutional law: equal protection; criminal procedure; privacy; and free speech and free exercise of religion. Traditional accounts of these bedrock debates about the relationship of the individual to the state focus on decisions of the United States Supreme Court. But these explanations tell just part of the story. The book corrects this omission by looking at each issue-and some others as well-through the lens of many constitutions, not one constitution; of many courts, not one court; and of all American judges, not federal or state judges. Taken together, the stories reveal a remarkably complex, nuanced, ever-changing federalist system, one that ought to make lawyers and litigants pause before reflexively assuming that the United States Supreme Court alone has all of the answers to the most vexing constitutional questions. If there is a central conviction of the book, it's that an underappreciation of state constitutional law has hurt state and federal law and has undermined the appropriate balance between state and federal courts in protecting individual liberty. In trying to correct this imbalance, the book also offers several ideas for reform. Review "Sutton's book - with its focus on the actual litigation of constitutional cases - is a welcome respite from books and articles on constitutional law that dwell in an abstract world far from the actual conduct of cases." -- Thomas A. Barnico, Massachusetts Law Review "Jeffrey Sutton, one of America's most distinguished judges, writes with a grace and intelligence equaled only by a handful of our greatest jurists. His collection of essays about the underestimated role of the states in creating our constitutional law is filled with human stories that bring the law to life. It's one of those rare books that lawyers and non-lawyers alike will enjoy and benefit from." - Laurence H. Tribe, Professor of Constitutional Law, Harvard Law School "Judge Sutton presents a masterful description of how the United States Constitution created a representative democracy with distinct roles and responsibilities for sovereign states within a federal system. Judge Sutton eloquently explains how state constitutions exercise the powers that are reserved for the States by the Tenth Amendment. This book imbues the reader with an understanding and appreciation of how the people in each state use their own constitutions to uniquely provide protections of individual liberty that are in addition to the guarantees of the Bill of Rights." - Justice Randy J. Holland, Retired, Delaware Supreme Court, State Constitutional Historian "Jeffrey Sutton is that rare combination: a respected jurist and also a scholar. In this book, he brings to life a little-known part of our judicial history: the contributions of state courts to the defense and articulation of constitutional values. The United States Supreme Court usually gets the limelight. This book shows that state court judges also deserve our attention and respect." - Michael W. McConnell, Richard & Frances Mallery Professor, Stanford Law School, and former Circuit Judge, United States Court of Appeals for the Tenth Circuit "51 Imperfect Solutions is a brilliant and long-overdue effort to restore the salience of state constitutional law-and to advocate for its independence-in our understandings of the development of all American rights, both state and federal. It is hard to imagine anyone wi