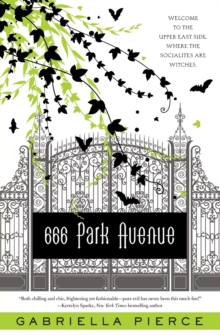 Product Description â€œBoth chilling and chic, frightening, yet fashionableâ€”pure evil has never been this much fun!â€â€”New York Times bestselling author Kerrelyn Sparks, â€œDark secrets and truly wicked socialitesâ€”666 Park Avenue is a thrill to the very last page.â€â€”New York Times bestselling author Zoey Dean Â  Elite Upper East Side Witches Rule Park Avenue! 666 Park Avenue by Gabriella Pierce kicks off a wonderfullyÂ Â high conceptÂ Â  andÂ  richly gothic contemporary series about the darkness lurking behind the gilded halls of New York City high society. For the original Gossip Girl and The Vampire Diaries fan whoâ€™s grown up and is ready for an edgier, more sophisticated read, 666 Park Avenue is the perfect paranormal diversion.Â  From Publishers Weekly Rosemary's Baby meets Buffy the Vampire Slayer in this breezy chick lit thriller about an American in Paris swept off her feet by a rich-and-good-looking New Yorker with some very dangerous secrets. Then again, aspiring architectural designer Jane Boyle has some hidden skeletons of her own, which she discovers when her estranged grandmother Celine leaves a death-note revelation that clueless Jane comes from a long line of witches. What follows as Jane moves with her handsome fiancÃ© Malcolm Doran to Manhattan's Upper East Side is a frightening cascade of wickedness that forces Jane to match witchy wits with Malcolm's mom-from-hell, Lynne, negotiate a mansion-full of Mean Girls and a Boo Radley-like stalkerâ€”and test drive her own considerable powers. A scary face-off between Jane and Lynne is both hilarious and exciting. And though the frantic and elaborate finale may leave the future of fledgling witch Jane in question, first-time author Pierce neatly leaves open a creaky, spooky door for a slew of sequels for fans of gothic social climbing and the supernatural. (Feb.) From Booklist Jane Boyle can?t believe it when fabulously wealthy American Malcolm Doran comes into her life and sweeps her off her feet. An orphan raised in the rural Alsace region of France by a superstitious, overprotective grandmother, she moved to Paris to study architecture. But after a whirlwind courtship and engagement, Jane agrees to leave Paris and return to New York with Malcolm. Shortly before leaving France, Jane discovers that she has magic powers?she?s a witch. And when she meets Malcolm?s family, one of the oldest and most powerful in New York, she knows that her magic will be useless against them, especially Malcolm?s very intimidating mother, Lynne. But as her wedding day gets closer, Jane discovers that there?s more to the Dorans than she thought, and her magic might be the only thing that will save her. Pierce?s first novel is a clever, engaging story for those who like their Gossip Girl tales with a little edge. --Hilary Hatton From the Back Cover What if your mother-in-law turned out to be evil. . . literally? Ever since fabulously wealthy Malcolm Doran walked into her life and swept her off her feet, fledgling architect Jane Boyle has been living a fairy tale. When he proposes with a stunning diamond to seal the deal, Jane can't believe her incredible luck and decides to leave her Paris-based job to make a new start with Malcolm in New York. But when Malcolm introduces Jane to the esteemed Doran clan, one of Manhattan's most feared and revered families, Jane's fairy tale takes a darker turn. Soon everything she thought she knew about the worldâ€”and herselfâ€”is upended. Now Jane must struggle with newfound magical abilities and the threat of those who will stop at nothing to get them. About the Author Gabriella Pierce is an American living in Paris with her two dogs.