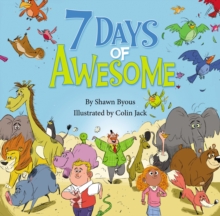 7 DAYS OF AWESOME: A CREATION TALE

Product Description With a Dr. Seuss feel, 7 Days of Awesome rhymes its way through each day of creation and encourages children to ponder Godâ€™s wisdom in creating this wonderful world. Accompanied by charming, animated illustrations by Colin Jack, this whimsical read-aloud book will be sure to delight both children and their parents. Review Byous (Because I Stubbed My Toe) and Jack (A Pirate's Mother Goose) offer a whirlwind tour of the biblical creation story that's more Dr. Seuss than King James (the book's scripture references actually derive from the New International Version). Opening with a question aimed at readers ('Hey! Where did you come from?/ And what about me?'), Byous follows a portly redheaded man and a pair of children on what seems to be a trip back in time to reveal 'how it all began.' The children serve as reader surrogates as they accompany the man through each of the seven days, traveling in an array of oddball vehicles that include an egg-shaped helicopter and a flying boat held up by balloons. Byous keeps his exclamatory rhymes light and upbeat ('And look! What a hoot!/ Today, God made fruit!'), and Jack's cartoons have the loose energy of storyboard sketches. While there's a slight disconnect between text and art (the unnamed, Willy Wonkaâ€“esque man is an unusual choice of guide), it's still a playfully engaging introduction to this Bible story. Ages 4â€“8. Illustrator's agency: Shannon Associates. -- Publishers Weekly About the Author Shawn Byous has been developing ideas and drawing for as long as he can remember. Since the 1990s he has been creating thousands of t-shirt designs for major retailers. He also creates fine art for galleries in Southern California and has written and illustrated several children's books. He currently lives in Southern California with his wonderful wife and 3 awesome kids. Â  Colin JackÂ is the illustrator of several books for children including theÂ Galaxy ZackÂ series,Â Toads on ToastÂ andÂ 1 Zany Zoo. He also works as a story artist at Dreamworks Animation, and has been involved in such productions as Hotel Transylvania, Grossology, and Ed, Edd n Eddy. Â