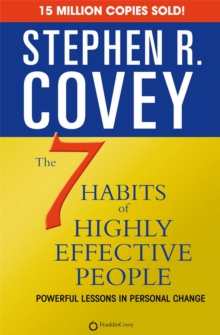 Anyone who thinks the audiocassette adaptation of Stephen Covey's bestseller, The 7 Habits of Highly Effective People, is a shortcut to reading the book has another thing coming. As a preview, the cassette is worth every one of its 90 minutes; as a substitute for the original, it will only leave you wishing for the rest. There's a reason 7 Habits has sold more than 5 million copies and been translated into 32 languages. Serious work has obviously gone into it, and serious change can likely come out of it--but only with constant discipline and steadfast commitment. As the densely packed tape makes immediately clear, this is no quick fix for what's ailing us in our personal and professional lives.

The tape opens to the silky-smooth, overtrained voice of the female narrator, who's responsible for tying together audio clips from actual Covey seminars. Leaving aside the occasional attempts at promoting Covey and his institute, her script does a first-rate job of making sense of Covey's own intense, analogy-rich style of explaining his habits. There's nothing simple about his approach to becoming an effective person. The first three habits alone--which have to do with personal responsibility, leadership, and self-management--could take years to master. Yet the last four are unattainable, the narrator insists, if you can't acquire the personal security--the "inner core," says Covey--that presumably comes from a mastery of the foundation.

Throughout our lessons, Covey's presence is both learned and thoroughly appealing. He drops references to the likes of Socrates, T.S. Eliot, and Robert Frost with the aplomb of an English professor. And his knack for mixing everyday stories with abstract concepts manages to clarify difficult issues while respecting our intelligence. You could argue that the cassette is nothing more than a clever marketing tool for selling another few million copies of the book. But, even at that, it's worth the investment in time and co