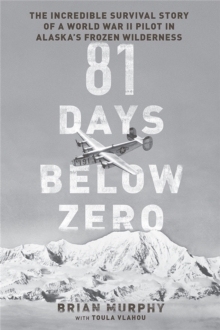 Product Description Shortly before Christmas in 1943, five Army aviators left Alaska's Ladd Field on a routine flight to test their hastily retrofitted B-24 Liberator in harsh winter conditions. The mission ended in a crash that claimed all but oneâ€”Leon Crane, a city kid from Philadelphia with no wilderness experience. With little more than a parachute for cover and an old Boy Scout knife in his pocket, Crane now found himself alone in subzero temperatures. Crane knew, as did the Ladd Field crews who searched unsuccessfully for the crash site, that his chance of survival dropped swiftly with each passing day. But Crane did find a way to stay alive in the grip of the Yukon winter for nearly twelve weeks and, amazingly, walked out of the ordeal intact. 81 Days Below Zero recounts, for the first time, the full story of Crane's remarkable saga. In a drama of staggering resolve and moments of phenomenal luck, Crane learned to survive in the Yukon's unforgiving wilds. His is a tale of the capacity to endure extreme conditions, intense loneliness, and flashes of raw terrorâ€”and emerge stronger than before. Review Advance Praise for 81 Days Below Zero "In 81 Days Below Zero, Brian Murphy rediscovers one of the most astounding survival stories in Alaskan history. The account is all the more remarkable because of Leon Crane's lifelong reluctance to talk about his ordeal. Murphy has saved from oblivion a tale that resonates with inspiration more than seventy years later." ?David Roberts, author of Alone on the Ice: The Greatest Survival Story in the History of Exploration "This is a great story, wonderfully told. From the moment the doomed plane takes off until the lone survivor rejoins civilization, the reader is taken on a thrilling, emotional, and hugely satisfying ride. Seamlessly interweaving the pilot's intense struggle against the elements with the broader history of the war, Alaska, and the home front, Brian Murphy has created a fascinating page-turner that you will not want to put down." ?Eric Jay Dolin, author of Leviathan and When America First Met China "The hardships endured by Leon Crane are unimaginable, and author Brian Murphy expertly takes the reader into Crane's inspiring journey of survival. You will find yourself rooting for Crane to take the next step, make the next right decision, and fight on. 81 Days Below Zero pulls you into Crane's thought process, and you might find yourself wondering, 'What would I have done in a similar situation?' Few of us would have that combination of creativeness and mental fortitude to do what Crane did." ?Michael J. Tougias, author of Fatal Forecast, A Storm Too Soon, and Overboard Kirkus Reviews, 4/1/15 ?A gripping storyâ€ Booklist, 5/15/15 ?A solid entry in the perennially popular canon of real-life adventure stories.â€ Roanoke Times review, 6/17/15 ?[A] thrilling true story? Many have been the tales of man against nature, the struggle for survival among icy peaks in a howling wilderness?some fictitious (Jack London's ?To Build a Fireâ€), others far too true (?Aliveâ€). Few if any have chronicled such an epic battle as this, the journey of a lone airman from near death to life, in the course of which might be seen a series of miracles, fortified by his indomitable will to survive? It is a well-told tale.â€ Minneapolis Star Tribune, 6/28/15 ? 81 Days Below Zero by Brian Murphy, is a thrilling page-turner of true-live adventure? Murphy's instincts for pacing and re-creating emotions, dialogue and details are so finely crafted that you might find yourself shivering right along with Crane as he struggles to hang on in subzero conditions with only his Boy Scout knife, 40 matches, a parachute and the clothes on his back.â€ Alaska Dispatch News, 7/12/15 ?Pilot's genuine Alaska survival story puts reality TV to shame? As survival tales go, this one is epic 81 Days Below Zero is a traditionally crafted narrative that balances historical details with themes of adventure an