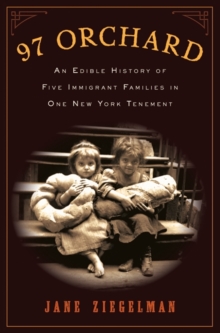 97 ORCHARD: AN EDIBLE HISTORY OF FIVE IMMIGRANT FAMILIES IN ONE NEW YORK TENEMENT

Product Description â€œSocial history is, most elementally, food history. Jane Ziegelman had the great idea to zero in on one Lower East Side tenement building, and through it she has crafted a unique and aromatic narrative of New Yorkâ€™s immigrant culture: with bread in the oven, steam rising from pots, and the family gathering round.â€ â€” Russell Shorto, author of The Island at the Center of the World 97 Orchard is a richly detailed investigation of the lives and culinary habitsâ€”shopping, cooking, and eatingâ€”of five families of various ethnicities living at the turn of the twentieth century in one tenement on the Lower East Side of Manhattan. With 40 recipes included, 97 Orchard is perfect for fans of Rachel Rayâ€™s Hometown Eats; anyone interested in the history of how immigrant food became American food; and â€œfoodiesâ€ of every stripe. From Publishers Weekly Ziegelman (Foie Gras: A Passion) puts a historical spin to the notion that you are what you eat by looking at five immigrant families from what she calls the "elemental perspective of the foods they ate." They are German, Italian, Irish, and Jewish (both Orthodox and Reform) from Russia and Germany--they are new Americans, and each family, sometime between 1863 and 1935, lived on Manhattanâ„¢s Lower East Side. Each represents the predicaments faced in adapting the food traditions it knew to the country it adopted. From census data, newspaper accounts, sociological studies, and cookbooks of the time, Ziegelman vividly renders a proud, diverse community learning to be American. She describes the funk of fermenting sauerkraut, the bounty of a pushcart market, the culinary versatility of a potato, as well as such treats as hamburger, spaghetti, and lager beer. Beyond the foodstuffs and recipes of the time, however, are the mores, histories, and identities that food evokes. Through food, the author records the immigrantsâ„¢ struggle to reinterpret themselves in an American context and their reciprocal impact on American culture at large. Copyright Â© Reed Business Information, a division of Reed Elsevier Inc. All rights reserved. From Booklist In this compelling foray into forensic gastronomy, Ziegelman pulls the facade off the titular 97 Orchard Street tenement.The result is a living dollhouse that invites us to gaze in from the sidewalk.With minds open and mouths agape, we witness the comings and goings of the building's inhabitants in the years surrounding the turn of the twentieth century. By focusing on the culinary lives of individuals from a variety of ethnic groups, Ziegelman pieces together a thorough sketch of Manhattan's Lower East Side at a time when these immigrants were at the forefront of a rapidly changing urban life. The food facts she uncovers are sure to interest and astound even those outside the culinary community, and guarantee that the reader will never look at a kosher dill pickle, a wrapped hard candy, or even the delectable foie gras the same way again. Ziegelman cleverly takes this opportunity to show us that in learning about food, we're actually learning about historyâ€”and when it comes to the sometimes surprising journey some of our favorite meals have taken to get here, it's fascinating stuff. --Annie Bostrom From the Back Cover In 97 Orchard, Jane Ziegelman explores the culinary life that was the heart and soul of New York's Lower East Side around the turn of the twentieth centuryâ€”a city within a city, where Germans, Irish, Italians, and Eastern European Jews attempted to forge a new life. Through the experiences of five families, all of them residents of 97 Orchard Street, she takes readers on a vivid and unforgettable tour, from impossibly cramped tenement apartments down dimly lit stairwells where children played and neighbors socialized, beyond the front stoops where immigrant housewives found respite and company, and out into the hubbub of the dirty, teeming streets. Ziegelman shows how immigrant cooks brought their ingenuity to the dai