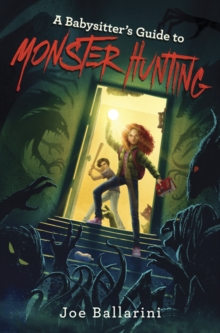 Product Description The Last Kids on Earth meets Goosebumps in this hilarious new series about a secret society of babysitters who protect kids from the monsters that really do live under their beds! When middle schooler Kelly Fergusonâ€™s Halloween plans switch from party-going to babysitting, she thinks the scariest part of her night will be the death of her social life. But then Baby Jacob gets kidnapped by the Boogeymanâ€™s minions and Kelly learns thereâ€™s a whole lot more to childcare than free snacks and Netflix. Like chasing shadow monsters, drop-kicking Toadies, and mastering monster-fighting moves like the Naptime Headlock and Playground Punch. Now, with the help of an ancient handbook and a secret society of butt-kicking babysitters, Kelly sets out to destroy the Boogeyman before he brings Jacobâ€™s nightmares to life. But when the monstersâ€™ trail leads to her schoolâ€™s big Halloween bash, Kelly will have to prove she can save the worldâ€”without totally embarrassing herself in front of her friends. Packed with black-and-white illustrations and insider secrets from the world of monster hunting,Â A Babysitterâ€™s Guide to Monster Hunting is full of tricks, treats, and terrifying twists! From School Library Journal Gr 5â€“7â€”This shining gem in the campy monster drama genre is a step up from R.L. Stine's "Goosebumps." Meet Kelly Ferguson, a struggling 12-year-old who hasn't quite found her place in the middle school hierarchy. Then she accidentally discovers a team of monster-fighting babysitters. Their mission is to save kids from the utmost evil in the world, the Grand Guignol. This despicable, devil-like creature, who is also known as the boogeyman, preys on defenseless children left in the care of babysitters. When Kelly's charge, Jacob, is kidnapped right under her nose, she must work with the band of super babysitters to help rescue baby Jacob from the clutches of the vile Grand Guignol. The over-the-top humorous action, snarky dialogue, and engaging characters will keep readers hooked. The other babysitters, such as Liz, who is haunted by the disappearance of a sibling, each have interesting backstories. Liz creates A Babysitter's Guide to Monster Hunting, which the sitters refer to when faced with a new threat. Excerpts from this handy manual are sprinkled throughout the narrative, adding an interesting dimension to the storytelling and world-building. VERDICT With shades of Buffy the Vampire Slayer, this tale of a courageous heroine and her ragtag group of intrepid babysitters battling nightmare-inducing beasts makes for addictive reading. Hand this to fans of Chris Colfer, Rick Riordan, and Adam Gidwitz.â€”Julie Shatterly, W. A. Bess Elementary School, Gastonia, NC Review â€œThis new series gives babysitting a daring edge and sets up girls outside of the popular crowd as heroines. An entertaining debut.â€ ( Booklist) â€œAn absolute romp of a book that will have kids everywhere howling for more. The writing is crisp and absolutely pitch-perfect for the middle-grade set. The story is exciting, funny, and very, very smart.â€ ( San Francisco Book Review) â€œA Babysitterâ€™s Guide to Monster Hunting is scary, funny, clever, and filled with heart. Best of all, the main character, Kelly Ferguson, proves a smart, appealing, and very real hero. You will root for her, and then you will root for a sequel.â€ (Gabrielle Zevin, New York Times Bestselling Author) â€œJoe Ballariniâ€™s book is an anthem for female friendship and the power that comes with it.â€ (Ali Bell, executive producer Ghostbusters) â€œA nonstop thrillventure about how to overcome your monsters!â€ (John Lee, director of Pee Wee's Big Holiday) â€œA rich, wonderful, and exciting world of characters and action. A superfun read!â€ (Ian Bryce, producer of Transformers) â€œBallariniâ€™s action-packed debut is amazing! An adventure roller-coaster ride with crazy chases, daring escapes, exploding teddy bears, enchanted weaponry, and an army of nightmares.â€ (Callum Greene, executive produ