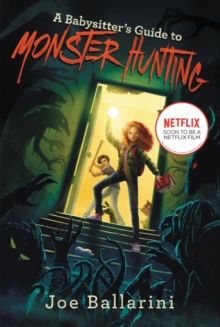 Product Description The Last Kids on Earth meets Goosebumps in this hilarious new series about a secret society of babysitters who protect kids from the monsters that really do live under their beds! When middle schooler Kelly Fergusonâ€™s Halloween plans switch from party-going to babysitting, she thinks the scariest part of her night will be the death of her social life. But then Baby Jacob gets kidnapped by the Boogeymanâ€™s minions and Kelly learns thereâ€™s a whole lot more to childcare than free snacks and Netflix. Like chasing shadow monsters, drop-kicking Toadies, and mastering monster-fighting moves like the Naptime Headlock and Playground Punch. Now, with the help of an ancient handbook and a secret society of butt-kicking babysitters, Kelly sets out to destroy the Boogeyman before he brings Jacobâ€™s nightmares to life. But when the monstersâ€™ trail leads to her schoolâ€™s big Halloween bash, Kelly will have to prove she can save the worldâ€”without totally embarrassing herself in front of her friends. Packed with black-and-white illustrations and insider secrets from the world of monster hunting,Â A Babysitterâ€™s Guide to Monster Hunting is full of tricks, treats, and terrifying twists! Review â€œThis new series gives babysitting a daring edge and sets up girls outside of the popular crowd as heroines. An entertaining debut.â€ ( Booklist) â€œAn absolute romp of a book that will have kids everywhere howling for more. The writing is crisp and absolutely pitch-perfect for the middle-grade set. The story is exciting, funny, and very, very smart.â€ ( San Francisco Book Review) â€œA Babysitterâ€™s Guide to Monster Hunting is scary, funny, clever, and filled with heart. Best of all, the main character, Kelly Ferguson, proves a smart, appealing, and very real hero. You will root for her, and then you will root for a sequel.â€ (Gabrielle Zevin, New York Times Bestselling Author) â€œJoe Ballariniâ€™s book is an anthem for female friendship and the power that comes with it.â€ (Ali Bell, executive producer Ghostbusters) â€œA nonstop thrillventure about how to overcome your monsters!â€ (John Lee, director of Pee Wee's Big Holiday) â€œA rich, wonderful, and exciting world of characters and action. A superfun read!â€ (Ian Bryce, producer of Transformers) â€œBallariniâ€™s action-packed debut is amazing! An adventure roller-coaster ride with crazy chases, daring escapes, exploding teddy bears, enchanted weaponry, and an army of nightmares.â€ (Callum Greene, executive producer of The Hobbit: The Desolation of Smaug) â€œA reminder that monsters believe in you even if you donâ€™t believe in them.â€ (Adam Robitel, director of Insidious and the Taking of Deborah Logan) About the Author Joe Ballarini is a screenwriter whoâ€™s worked on numerous feature films, including My Little Pony: The Movie and the zombie comedy cult classic Dance of the Dead. He has written family films, horror films, silly comedies, and sweeping adventures. He lives with his wife, their son, and their two rescue dogs in Los Angeles, California.