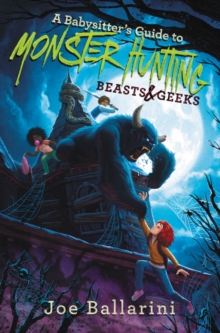 Product Description Goosebumps meets The Last Kids on EarthÂ in the second action-packed adventure in a hilariously scary series about a secret society of monster-bashing babysitters. â€œThis shining gem in the campy monster drama genre is a step up from R.L. Stineâ€™s Goosebumps.â€ â€”School Library Journal Kellyâ€™s been a celebrity ever since she defeated the Boogeyman and his army of nightmares on Halloween. But now all the other monsters want revenge. And if Kellyâ€™s going to survive Babysitter Bootcamp, sheâ€™ll have to face the Spider Queen, whose wicked web turns her parents, BFF, and middle-school teachers into mindless minions. All in a nightâ€™s work! Review Praise for A BABYSITTERâ€™S GUIDE TO MONSTER HUNTING #1: â€œThis shining gem in the campy monster drama genre is a step up from R.L. Stineâ€™s Goosebumps.â€ ( School Library Journal) â€œA series opener that melds Goosebumps and the Baby-Sitters Club with ironic glue.â€ ( Kirkus Reviews) â€œThis new series gives babysitting a daring edge and sets up girls outside of the popular crowd as heroines. An entertaining debut.â€ ( Booklist) â€œ A Babysitterâ€™s Guide to Monster Hunting is scary, funny, clever, and filled with heart. Best of all, the main character, Kelly Ferguson, proves a smart, appealing, and very real hero. You will root for her, and then you will root for a sequel.â€ (Gabrielle Zevin, New York Times Bestselling Author) â€œJoe Ballariniâ€™s book is an anthem for female friendship and the power that comes with it.â€ (Ali Bell, executive producer Ghostbusters) â€œA nonstop thrillventure about how to overcome your monsters!â€ (John Lee, director of Pee Weeâ€™s Big Holiday) â€œA rich, wonderful, and exciting world of characters and action. A superfun read!â€ (Ian Bryce, producer of Transformers) â€œBallariniâ€™s action-packed debut is amazing! An adventure roller-coaster ride with crazy chases, daring escapes, exploding teddy bears, enchanted weaponry, and an army of nightmares.â€ (Callum Greene, executive producer of The Hobbit: The Desolation of Smaug) â€œA reminder that monsters believe in you even if you donâ€™t believe in them.â€ (Adam Robitel, director of Insidious and The Taking of Deborah Logan) About the Author Joe Ballarini is a screenwriter whoâ€™s worked on numerous feature films, including My Little Pony: The Movie and the zombie comedy cult classic Dance of the Dead. He has written family films, horror films, silly comedies, and sweeping adventures. He lives with his wife, their son, and their two rescue dogs in Los Angeles, California.