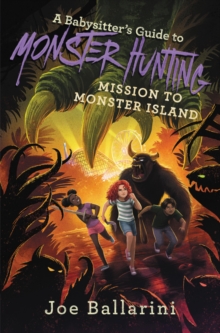 Product Description Goosebumps meets The Last Kids on Earth as Kelly and the babysitters try to stop an evil plan to turn kids into monsters in the third action-packed book in this hilariously scary illustrated series. â€œThis shining gem in the campy monster drama genre is a step up from R.L. Stineâ€™s Goosebumps.â€ â€”School Library Journal Itâ€™s the end of the world as she knows it! Thirteen-year-old Kelly Fergusonâ€™s secret life as a monster-hunting babysitter is taking a beastly turn. Now she has to go on a rescue mission to Monster Islandâ€”where monster royalty is turning kids into hairy mutant monsters! To pull it off, sheâ€™ll have to face off against internet trolls, trash monsters, and her fear of screwing upâ€”plus the biggest, baddest Boogey of all. With the fate of humanity on the line, can Kelly save the kids, the world, and her own social life before the big school dance? A babysitterâ€™s job is never done! Review Praise for A BABYSITTERâ€™S GUIDE TO MONSTER HUNTING #1: â€œThis shining gem in the campy monster drama genre is a step up from R.L. Stineâ€™s Goosebumps.â€ (School Library Journal) â€œA series opener that melds Goosebumps and the Baby-Sitters Club with ironic glue.â€ ( Kirkus Reviews) â€œThis new series gives babysitting a daring edge and sets up girls outside of the popular crowd as heroines. An entertaining debut.â€ (ALA Booklist) â€œScary, funny, clever, and filled with heart.â€ (Gabrielle Zevin, New York Times Bestselling Author) â€œAn anthem for female friendship and the power that comes with it.â€ (Ali Bell, executive producer of Ghostbusters) â€œA reminder that monsters believe in you even if you donâ€™t believe in them.â€ (Â Adam Robitel, director of Insidious and The Taking of Deborah Logan) About the Author Joe Ballarini is a screenwriter whoâ€™s worked on numerous feature films, including My Little Pony: The Movie and the zombie comedy cult classic Dance of the Dead. He has written family films, horror films, silly comedies, and sweeping adventures. He lives with his wife, their son, and their two rescue dogs in Los Angeles, California.