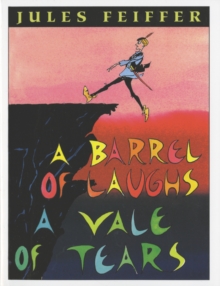 A BARREL OF LAUGHS, A VALE OF TEARS

Product Description â€˜Prince Roger sets out eagerly on a quest and finds a few adventures, a lot of friends, a damsel or two in distress (not!) and himself, in the end. A â€˜carrier of joyâ€™ whose mere presence causes everyone to laugh uncontrollably, Roger finds cruelty and kindness equally amusing, and expects his quest to be a lark. Itâ€™s anything but: As Roger passes through the Forever Forest, nearly starves at the Dastardly Divide, sees people at their worst in the Valley of Vengeance, and temporarily despairs in the Mountains of Malice, he sobers up, learns to care for others, becomes an expert peacemaker, does Good Deeds, and falls in love with Lady Sadie, who says what she thinks as she repeatedly saves his bacon.â€™â€”K. â€˜Feifferâ€™s worldly-wise, confiding tone and sense of the absurd are highly congenial, and the drawings are a vintage Feiffer delight.â€™â€”Publishers Weekly. 100 Books for Reading and Sharing 1995 (NY Public Library) From Publishers Weekly An inordinately cheerful prince embarks on a quest for greater gravity. "Feiffer's worldly-wise, confiding tone and sense of the absurd are highly congenial, and the drawings are a vintage Feiffer delight," said PW. All ages. Copyright 1998 Reed Business Information, Inc. Review "A Barrel of Laughs, A Vale of Tears scores 10 out of 10 on the demanding Pinkwater Scale...For certain people, I think it may become a special, personal book -- they'll take it along when they go to college and resort to it as comfort reading. As adults, they'll share it with best friends and children. Not a bad fate for a book.Daniel Pinkwater, -- "The New York Times Book Review "Feiffer's worldly-wise, confiding tone and sense of the absurd are highly congenial, and the drawings are a vintage Feiffer delight."-- "Publishers Weekly "Jules Feiffer follows "The Man in the Ceiling" with another winner, this time a rollicking medieval farce that pokes fun at medieval faraces -- and just about everything else -- while managing tat the same time to be hilarious, engaging, and thoroughly entertaining.""--Family Life" About the Author Jules Feiffer has won a number of prizes for his cartoons, plays, and screenplays, including the Pulitzer Prize for editorial cartooning. His books for children include The Man in the Ceiling, A Barrel of Laughs, A Vale of Tears, I Lost My Bear, Bark, George, and Meanwhile... He lives in New York City. In His Own Words... "I have been writing and drawing comic strips all illy life, first as a six-year-old, when I'd try to draw like my heroes: Alex Raymond, who did Flash Gordon, E. C. Segar, who did Popeye, Milton Caniff, who did Terry and the Pirates. The newspaper strip back in the I 1940s was a glorious thing to behold. Sunday pages were full-sized and Colored broadsheets that created a universe that could swallow a boy whole. "I was desperate to be a cartoonist. One of my heroes was Will Eisner, who did a weekly comic book supplement to the Sunday comics. One day I walked into his office and showed him my samples. He said they were lousy, but lie hired me anyway. And I began my apprenticeship. "Later I was drafted Out of Eisner's office into tile Korean War. Militarism, regimentation, and mindless authority combined to squeeze the boy cartoonist Out Of me and bring out the rebel. There was no format at the time to fit [he work I raged and screamed to do, so I had to invent one. Cartoon satire that commented on the Lin military the Bomb, the Cold War, the hypocrisy of grownLIPS, the mating habits of urban Young men and women, these were my subjects. After four years of trying to break into print and getting nowhere, the Village Voice, the first alternative newspaper, offered to publish me. Only one catch: They couldn't Pay me. What (lid I care? "My weekly satirical strip, Sick Sick Sick, later renamed Feiffer started appearing in late 1956. Two years later, Sick Sick Sick came out in book form and became a bestseller. The following years saw a string of carto