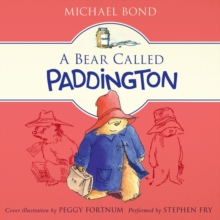 Product Description The classic novel about Paddingtonâ€”who's now a major movie star! Paddington Bear had traveled all the way from Peru when the Browns first met him in Paddington Station. Since then, their lives have never been quite the same . . . for ordinary things become extraordinary when a bear called Paddington is involved. First published in 1958, A Bear Called Paddington is the first novel by Michael Bond, chronicling the adventures of this lovable bear. Paddington has charmed readers for generations with his earnest good intentions and humorous misadventures. This brand-new edition of the classic novel contains the original text by Michael Bond and illustrations by Peggy Fortnum. From the Back Cover Paddington Bear had traveled all the way from Darkest Peru when the Brown family first met him on Paddington Station. Since then their lives have never been quite the same ... for ordinary things become quite extraordinary when a bear called Paddington is involved. Read by Stephen Fry About the Author Michael Bond began chronicling Paddingtonâ€™s adventures in his first book, A Bear Called Paddington, published in 1958. Fortunately, bears donâ€™t need much encouragement, and Paddington has since filled the pages of twelve further novels, a variety of picture books, and many other projects written for the young at heart. Stephen Fry was born in London in 1957 and educated at Stout's Hill, Uppingham, and Queens' College, Cambridge. At Cambridge he joined the Footlights, where he first met Hugh Laurie. He has numerous television appearances to his credit, most notably, A Bit of Fry and Laurie, Jeeves and Wooster, Blackadder, QI, and House. Major film roles include Peter in Peter's Friends (1990) and Oscar Wilde in Wilde (1997); in the realm of television, his critically acclaimed The Secret Life of a Manic Depressive won an Emmy. He is the author of the best selling novels The Liar, The Hippopotamus, Making History, and Revenge: A Novel, as well as the highly acclaimed autobiography Moab Is My Washpot and, in 2005, a well-received guide to writing poetry, The Ode Less Travelled. From AudioFile "Please look after this bear." Thus begins the classic children's story, written in 1958, of a bear from darkest Peru, picked up by the Brown family at Paddington Station. Michael Bond's story is indubitably British, and Stephen Fry's Paddington is delightfully grave and proper, earnestly well-meaning in spite of his frequent misadventures both domestic and around London. Fry is facile with myriad British accents from Cockney cabbies to Portobello Road shopkeepers, and his comic timing and subtle delivery accentuate the book's sly humor. A welcome bonus: CD tracks are clearly marked, making it easy to resume where one leaves off or to locate a favorite chapter. Settle in with a cuppa and sometoast and marmalade and queue up the CD player for perfect family listening. J.M.D. Â© AudioFile 2005, Portland, Maine-- Copyright Â© AudioFile, Portland, Maine