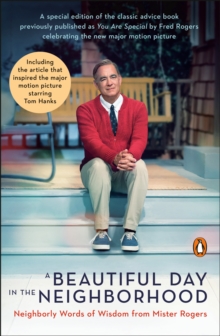 A BEAUTIFUL DAY IN THE NEIGHBORHOOD (MOVIE TIE-IN): NEIGHBORLY WORDS OF WISDOM FROM MISTER ROGERS

Product Description The inspiring profile brought to life in the major motion picture starring Tom Hanks, plus a collection of warm advice and encouragement from Americaâ€™s favorite neighbor.Â  Tom Junodâ€™s Esquire profile of Fred Rogers, â€œCan You Say... Hero?,â€ has been hailed as a classic of magazine writing. Now, his moving story of meeting and observing the beloved host of Mister Rogersâ€™ Neighborhood is the inspiration for A Beautiful Day in the Neighborhood, directed by Marielle Heller and written by Micah Fitzerman-Blue & Noah Harpster. Here, Junodâ€™s unforgettable piece appears for the first time in book form alongside an inspiring collection of advice and encouragement from Mister Rogers himself. Covering topics like relationships, childhood, communication, parenthood, and more, Rogersâ€™s signature sayings and wise thoughts are included here. Pairing the definitive portrait of a national icon with his own instructions for living your best, kindest life, this book is a timeless treasure for Mister Rogers fans. About the Author Fred Rogers (1928-2003) was a producer, writer, magician, puppeteer, minister, husband, and father who began working in children's television in the 1950s and created the PBS program Mister Rogers' Neighborhood. Tom Junod has written for GQ, Esquire, and ESPN, among other publications. His 1998 profile of Fred Rogers for Esquire is the basis for the feature film A Beautiful Day in the Neighborhood.