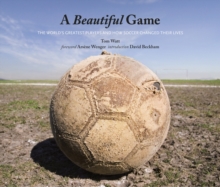 A BEAUTIFUL GAME: THE WORLD'S GREATEST PLAYERS AND HOW SOCCER CHANGED THEIR LIVES

Product Description From Tom Watt, author of My Side, the best-selling autobiography of David Beckham, comes A Beautiful Game. Combining stunning photographs with the worldâ€™s greatest players sharing their personal stories of how soccer transformed their lives, this inspiring book is an intoxicating celebration of the â€œbeautiful game.â€ Available in time for the 2010 World Cup in South Africa. Review â€œDonâ€™t let the long title intimidate you: This large-format offering is filled with gorgeous photos and candid interviews with some of the sportâ€™s most accomplished players, who share their love of the game.â€ ( Washington Post) â€œ...lush, evocative photography...â€ (goal.com) â€œ...readers will no doubt find something to identify with in the anecdotes of great players.â€ (goal.com) â€œ...the undemanding book is fun to flip through and 5 percent of the revenue from the book goes to UNICEF. Recommended.â€ (Los Angeles Daily News) â€œ...a generous collection of eye-catching photographs, this coffee-table book lets some of the worldâ€™s best players track back to their days as youngsters and write about how the sport seduced them.â€ ( New York Times) â€œA Beautiful Game also offers an interesting data set: a rare chance to consider the question of what makes a player from the perspectives of the players themselves.â€ (Pitch Invasion) â€œFull of vibrant images, the book is an inspiring ode to the sport.â€ (San Francisco Chronicle) â€œ...a great promise thatâ€™s beautifully executed.â€ (Oregonian (online)) From the Back Cover Wherever you are on earth, it's only a matter of time before you come across children playing soccer. Another five minutes and you will probably find yourself having a ball rolled to your feet as an invitation to join in the game. Soccer is a common language and a culture shared: a joy, a passion, an escape, and an affirmation of identity understood and celebrated by childrenâ€”and their parentsâ€”in every country around the globe. For this unique collaborative project, soccer writer Tom Watt talked to the world's top players about growing up and falling in love with the game: Argentina's Lionel Messi and Brazil's Gilberto Silva; England's David James and Scotland's Craig Gordon; Italy's Fabio Cannavaro, Spain's Iker Casillas, and France's Franck RibÃ©ry; South Africa's Benni McCarthy and Nigeria's Nwankwo Kanu; USA's Landon Donovan and Japan's Shunsuke Nakamura; and the world's most famous player, David Beckham. A Beautiful Game tells their stories, in the players' own wordsâ€”stories of boys who would grow up to be heroes for a new generation of young players and fans. They look back to their childhoods: to their family homes, to their schoolrooms, to the friends they grew up with, and to the places where they first played the game that has made them stars. The players' words are brought to life with over 160 full-color images that offer rare, emotive, and striking insights into childhood all over the world, and celebrate soccer's ability to touch the lives of childrenâ€”and adultsâ€”wherever the beautiful game is played. Five percent of the originating publisher's revenue from sales of the book worldwide will benefit selected UNICEF sports-related projects. About the Author Tom Watt is an English actor, writer, and broadcaster. Television, film, and stage credits include EastEnders, Patriot Games, and Fever Pitch. Tom has broadcast about soccer extensively in the U.K. and the U.S. He co-produced the innovative children's sports series Rookies for Channel Four television and created the successful Row Z for BBC Choice TV. After presenting sports shows over the past ten years for BBC and independent radio and television stations, he is currently the lead presenter for BBC London's soccer coverage and hosts weekly programs for Arsenal's club TV channel. As well as writing about soccer for every major U.K. newspaper, Tom is the author of several books about the game: The End, a groundbreaking oral history of Arsenal FC; A Passion