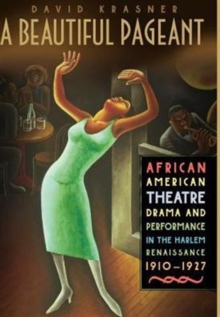 A BEAUTIFUL PAGEANT: AFRICAN AMERICAN THEATRE, DRAMA, AND PERFORMANCE IN THE HARLEM RENAISSANCE, 1910-1927

Product Description The Harlem Renaissance was an unprecedented period of vitality in the American Arts. Defined as the years between 1910 and 1927, it was the time when Harlem came alive with theater, drama, sports, dance and politics. Looking at events as diverse as the prizefight between Jack Johnson and Jim 'White Hope' Jeffries, the choreography of Aida Walker and Ethel Waters, the writing of Zora Neale Hurston and the musicals of the period, Krasner paints a vibrant portrait of those years. This was the time when the residents of northern Manhattan were leading their downtown counterparts at the vanguard of artistic ferment while at the same time playing a pivotal role in the evolution of Black nationalism. This is a thrilling piece of work by an author who has been working towards this major opus for years now. It will become a classic that will stay on the American history and theater shelves for years to come. From Library Journal Krasner (theater, Yale Univ.; Resistance, Parody, and Double Consciousness in African American Theater, 1895-1910) examines the now-familiar ground of the Harlem Renaissance in light of the Black Nationalist movement of the period. What separates this work from the pack is Krasner's discussion of lesser-known figures and works, including folk dramatists Georgia Douglas Johnson and Willis Richardson, choreographer Aida Overton Walker, and the pageant The Star of Ethiopia. Ultimately, Krasner argues, the period saw advances and retreats in the struggle for justice, with often paradoxical efforts showing startling success. Provocative insights into the period just before such giants as Paul Robeson and Langston Hughes hit the scene make this a worthy acquisition for all theater and African American culture collections. It nicely complements Brenda Dixon Gottschild's Waltzing in the Dark and Harry J. Elam Jr. and David Krasner's African American Performance and Theatre History. Anthony J. Adam, Prairie View A&M Univ., TX Copyright 2002 Reed Business Information, Inc. Review 'A densely detailed, consistently readable account of the Harlem Renaissance...Krasner's aim is far broader than a period of history in theatre, he deftly concentrates on 'specific events in order to sketch a larger picture' and alters people's way of thinking about the Harlem Renaissance.' - Publishers Weekley 'Krasner's arguments are persuasive and engaging.' - D.B. Wilmeth, Choice 'Densely detailed, consistently readable ... succinct and neatly incorporated background sketches along with intelligible and accessible references to theorists enrich the finer details.' - Publishers Weekly 'A timely, lively, essential book that advances African American performance studies while specifically bringing theatre, performance and drama into focus in the glory years of the Harlem Renaissance.' - Robert B Stepto, Yale University 'Breezy, witty,and intelligent look at a decade that brought us such memorable and groundbreaking shows.' - Library Journal About the Author DAVID KRASNER is Director of Undergraduate Theater Studies at Yale University. His previous book Resistance, Parody, and Double Consciousness in African American Theater, 1895-1910 (SMP 1997) received the 1998 Errol Hill Award from the American Society for Theater Research.