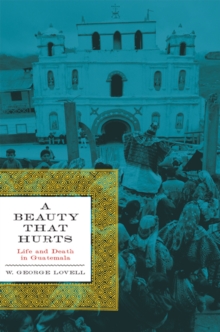 A BEAUTY THAT HURTS: LIFE AND DEATH IN GUATEMALA, SECOND REVISED EDITION (THE LINDA SCHELE SERIES IN MAYA AND PRE-COLUMBIAN STUDIES)

Though a 1996 peace accord brought a formal end to a conflict that had lasted for thirty-six years, Guatemala's violent past continues to scar its troubled present and seems destined to haunt its uncertain future. George Lovell brings to this revised and expanded edition of A Beauty That Hurts decades of fieldwork throughout Guatemala, as well as archival research. He locates the roots of conflict in geographies of inequality that arose during colonial times and were exacerbated by the drive to develop Guatemala's resources in the nineteenth and early twentieth centuries. The lines of confrontation were entrenched after a decade of socioeconomic reform between 1944 and 1954 saw modernizing initiatives undone by a military coup backed by U.S. interests and the CIA. A United Nations Truth Commission has established that civil war in Guatemala claimed the lives of more that 200,000 people, the vast majority of them indigenous Mayas.

Lovell weaves documentation about what happened to Mayas in particular during the war years with accounts of their difficult personal situations. Meanwhile, an intransigent elite and a powerful military continue to benefit from the inequalities that triggered armed insurrection in the first place. Weak and corrupt civilian governments fail to impose the rule of law, thus ensuring that Guatemala remains an embattled country where postwar violence and drug-related crime undermine any semblance of orderly, peaceful life.