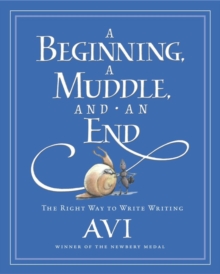 A BEGINNING, A MUDDLE, AND AN END: THE RIGHT WAY TO WRITE WRITING