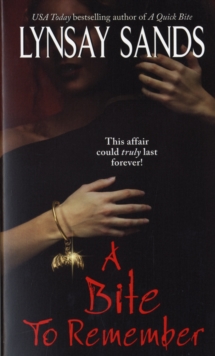 Product Description Rule #1: Never get involved with someone who won't be there for you when the sun comes up. Once bitten, twice shy, and sexy PI Jackie Morrisey wasn't going there again. Vincent Argeneau may be the hottest guy she's ever met, living or dead, but she's here to stop a killer from turning this vampire into dust, not to jump into bed with him. Rule #2: Never kiss a vampire . . . it can be a pain in the neck. Okay, so Vincent's had four hundred years to perfect his kissing skills, and he does look rather tempting when he runs around the house shirtless. He's also charming, protective . . . did we mention he can kiss? Jackie needs to be on her guard, or else she'll have to come up with a new rule: If you're going to fall in love with a vampire, make sure it's a bite to remember. From Booklist Vincent Argeneau, cousin of the Canadian Argeneaus from Single White Vampire (2003) and Love Bites (2004), has had to shut down all his stage productions because a saboteur's actions are escalating, and he fears that someone will be killed. Cast members have been injured and others are quitting, and everyone acting in a New York production has come down with anemia. Bastien Argeneau sends PI Jackie Morrisey and her assistant, Tiny McGraw, to help. Jackie, who previously had a bad relationship with a vampire, has no personal interest in Vincent but realizes that he is in danger. Vincent discovers that Jackie is his lifemate but knows that she has an antipathy toward immortals. When Jackie is captured by the saboteur, she bites her vampire assailant's wrist and accidentally swallows blood, thus beginning the transformation to immortal. This enjoyable combination of mystery, paranormal fantasy, and romance will appeal to readers who relish cozy vampire stories featuring characters with a true nobility of spirit. Diana Tixier Herald Copyright Â© American Library Association. All rights reserved About the Author Lynsay Sands is the nationally bestselling author of the Argeneau/Rogue Hunter vampire series, as well as numerous historicals and anthologies. Sheâ€™s been writing since grade school and considers herself incredibly lucky to be able to make a career out of it. Her hope is that readers can get away from their everyday stress through her stories, and if there are occasional uncontrollable fits of laughter, thatâ€™s just a big bonus. Please visit her on the web at www.lynsaysands.net.