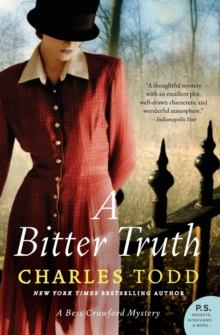 Product Description â€œHighly recommendedâ€”well-rounded, believable characters, a multi-layered plot solidly based on human nature, all authentically set in the England of 1917â€¦an outstanding and riveting read.â€â€”New York Times bestselling author Stephanie Laurens â€œBess Crawford is a strong and likable character.â€â€”Washington Times Already deservedly lauded for the superb historical crime novels featuring shell-shocked Scotland Yard inspector Ian Rutledge (A Lonely Death, A Pale Horse et al), acclaimed author Charles Todd upped the ante by introducing readers to a wonderful new series protagonist, World War One battlefield nurse Bess Crawford. Featured for a third time in A Bitter Truth, Bess reaches out to help an abused and frightened young woman, only to discover that no good deed ever goes unpunished when the good Samaritan nurse finds herself falsely accused of murder. A terrific follow up to Toddâ€™s A Duty to the Dead and An Impartial Witness, A Bitter Truth is another thrilling and evocative mystery from â€œone of the most respected writers in the genreâ€ (Denver Post) and a treat for fans of Elizabeth George, Anne Perry, Martha Grimes, and Jacqueline Winspear. Review â€œMakes fine work of the brooding atmosphere.â€ ( New York Times Book Review on A Bitter Truth) â€œOutstanding.â€ ( Publishers Weekly (starred review) on A Bitter Truth) â€œBess is a very strong series lead, the historical setting is as well developed here as it is in the Rutledge books, and the mysteries are just as elegantly constructed. Readers who have yet to sample the Crawford series should be strongly encouraged to do so.â€ ( Booklist on A Bitter Truth) â€œFew writers surpass Todd in depicting the insanity of war.â€ ( Kirkus Reviews on A Bitter Truth) â€œTodd brings World War I England and France to life with an intriguing plot and an intrepid sleuth.â€ ( Library Journal on A Bitter Truth) â€œA thoughtful mystery with an excellent plot, well-drawn characters and wonderful atmosphere.â€ (Associated Press on A Bitter Truth) â€œA well-envisaged plot, a deep sense of time and place and characters drawn with care and compassion.â€ ( Richmond Times-Dispatch on A Bitter Truth) â€œCharles Todd has developed believable characters that carry along this story with lightning speed from the first page to the last.â€ ( New York Journal of Books on A Bitter Truth) â€œThe Todds excel at complex characterizations....For lovers of upper-drawer British whodunnits and Anglophiles in general, A Bitter Truth should prove a sweet treat indeed.â€ ( Wilmington Star-News on A Bitter Truth) â€œA lovely picture of a slower world.â€ ( Charlotte Observer on A Bitter Truth) From the Back Cover While attempting to help a woman in distress, World War I battlefield nurse Bess Crawford learns a bitter truth, that no good deed goes unpunished. Returning to her London flat from the front lines in France for a well-earned Christmas leave, Bess Crawford comes upon a bruised and shivering woman huddled in the doorway. Propelled by pity, Bess takes her in. Yet despite the ill effects of a concussion suffered during a quarrel with her husband that erupted into violence, the woman decides to return home, and asks Bess to travel with her to Sussex. At Vixen Hill, Bess discovers a family in mourning for an elder son who has died of war wounds, and a husband tormented by jealousy and his own guilty conscience. But when a troubled houseguest meets an untimely death, Bess finds herself the prime suspect, and on the trail of a vicious killer that leads back to war-torn France toward a startling revelation that will place her life in dire jeopardy. About the Author Charles Todd is theÂ New York TimesÂ bestselling author of the Inspector Ian Rutledge mysteries, the Bess Crawford mysteries, and two stand-alone novels. A mother-and-son writing team, they live on the East Coast.