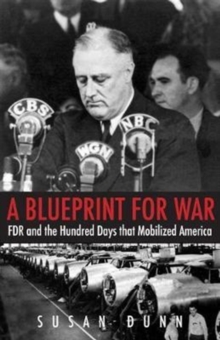 A BLUEPRINT FOR WAR: FDR AND THE HUNDRED DAYS THAT MOBILIZED AMERICA (THE HENRY L. STIMSON LECTURES SERIES)

Product Description In the cold winter months that followed Franklin Rooseveltâ€™s election in November 1940 to an unprecedented third term in the White House, he confronted a worldwide military and moral catastrophe. Almost all the European democracies had fallen under the ruthless onslaught of the Nazi army and air force. Great Britain stood alone, a fragile bastion between Germany and American immersion in war. In the Pacific world, Japan had extended its tentacles deeper into China. Susan Dunn dramatically brings to life the most vital and transformational period of Rooseveltâ€™s presidency: the hundred days between December 1940 and March 1941, when he mobilized American industry, mustered the American people, initiated the crucial programs and approved the strategic plans for Americaâ€™s leadership in World War II. As the nation began its transition into the preeminent military, industrial, and moral power on the planet, FDR laid out the stunning blueprint not only for war but for the American Century. Review "Dunn rightly calls this [sense of purpose] â€˜a decisive, irreversible shift in national consciousness,â€™ transforming America from isolationist into internationalist. . . . Much of this had only been half explained, and Dunnâ€™s achievement is to make the view of FDRâ€™s accomplishment clear."â€”David M. Shribman, Boston Globe â€œA concise and engaging retelling of the prelude to US involvement in WW II.â€â€”A.J. Falk, Choice â€œA taut, lean narrative account of [a] critical turning point in US history. . . . Gripping. . . . [Dunnâ€™s] fresh, and lasting, contribution to historiography is to identify a brief time period during which Roosevelt turned America decisively towards the war. . . . Roosevelt emerges from Dunnâ€™s electrifying account as a supremely confident commander-in-chiefâ€”in turn inspired, strategic, cunning even, ingenious, gregarious, and most of all tenacious.â€â€”Theo Zenou, The Journal of History â€œSusan Dunn is one of the great Roosevelt historians of our time, and with this fresh and fascinating book, she has proven it once again.â€â€”Michael Beschloss, author of Presidents of War â€œA superbly researched and written history of howÂ FDR and his top aides moved decisively after the 1940 election to provide massive American aid to Great Britain to support its lonely fight against Hitler, and how FDR set forth an enlightened and lasting vision of America's international responsibilities in the future.â€â€”James T. Patterson, Bancroft Prize-winning author of Grand Expectations â€œ A Blueprint for War should become the definitive telling of a pivotal episode in American history.â€â€”Edward J. Larson, Pulitzer Prize-winning author of The Return of George Washington â€œSusan Dunn has written a wonderful book about an important and, until now, under-examined chapter of Franklin Delano Rooseveltâ€™s presidency. In A Blueprint for War, we see Roosevelt at his bestâ€”the skilled navigator of domestic politics and the visionary shepherd of U.S. foreign policy. Dunn shows how FDRâ€™s Third Hundred Days were critical to overcoming isolationism and rebuilding American leadership in age of global turmoil.â€â€”E.J. Dionne Jr., co-author of One Nation After Trump Â  About the Author Susan Dunn, the Massachusetts Professor of Humanities at Williams College, is the author of a dozen books, including 1940: FDR, Willkie, Lindbergh, Hitlerâ€”the Election Amid the Storm.