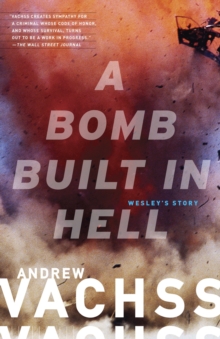 Product Description Andrew Vachss' pre- Flood novel A Bomb Built in Hell was written in 1973. It was rejected by every publisher, one of whom described it as a "political horror story," others of whom berated it for its "lack of realism," including such things as Chinese youth gangs and the fall of Haiti. And the very idea of someone entering a high school with the intent of destroying every living person inside was just too ... ludicrous. Readers of Vachss' Burke series will immediately recognize Wesley, the main character of A Bomb Built in Hell. This is his story. From Booklist Wesley, who appeared in a number of Vachssâ€™ legendarily dark Burke novels, is the protagonist of this hard-bitten tale written in 1972, more than a decade before the first Burke novel appeared. Itâ€™s the story of an orphan who, by the mid-1950s, had spent much of his life in New Yorkâ€™s juvenile-detention system before graduating to maximum security. There he meets Carmine, a tough old murderer who educates him to be a better criminal. Wesley comes to see himself as Carmineâ€™s son and ultimately as the instrument of Carmineâ€™s vengeance. Wesley does his time and, as per Carmineâ€™s instructions, becomes a professional hit man. A Bomb Built in Hell presages motifs Vachss employed in the Burke novels, but even crime fans unfamiliar with Burke can relish it. Wesley is utterly remorseless, and the story is told in the coldest and sparest of prose. It also features telling period detailsâ€”e.g., the tawdry and seamy Times Square area of the time, and the homeless who rushed to â€œcleanâ€ the windshields of cars stopped at Bowery traffic lights. --Thomas Gaughan Review "Vachss' prose, though not as stylized as the writing that would take the mystery world by storm in Flood, is as tight and succinct as Wesley's meticulously planned murders. Every Burke fan should read this novel." -- Publishers Weekly, Sept 18, 2000 From the Author Readers of Vachss' Burke series will immediately recognize Wesley, the main character of A Bomb Built in Hell. This is his story. About the Author Andrew Vachss has been a federal investigator in sexually transmitted diseases, a social services caseworker, and a labor organizer, and has directed a maximum-security prison for youthful offenders. Now a lawyer in private practice, he represents children and youths exclusively. He is the author of numerous novels, including the Burke series, three collections of short stories, and a wide variety of other material including song lyrics, graphic novels, and a "children's book for adults." His books have been translated into twenty languages and his work has appeared in Parade, Antaeus, Esquire, Playboy, the New York Times, and numerous other forums. A native New Yorker, he now divides his time between the city of his birth and the Pacific Northwest. The dedicated Web site for Vachss and his work is vachss.com. Excerpt. Â© Reprinted by permission. All rights reserved. Wesley sat quietly on the roof of the four-story building overlooking the East River near Pike Slip. It was 4:30 on a Wednesday afternoon in August, about eighty-five degrees and still clear-bright. With his back flat against the storage shack on the roof, he was invisible to any- one looking up from the ground. He knew from observation that neither the tourist helicopters nor the police versions ever passed over this area. Â  In spite of the heat, Wesley wore a soft black felt hat and a dark suit; his hands were covered with dark-gray deerskin gloves. The breeze blew the ash away from his cigarette. Aware of his habit of biting viciously into the filters, he carefully placed the ground-out butt into his leather-lined side pocket before he got to his feet and stepped back inside the shack. Â  A soft green light glowed briefly as he entered. Wesley picked up a silent telephone receiver and held it to his ear. He said nothing. The disembodied voice on the phone said, â€œYes,â€ and a dial tone followed at once. So