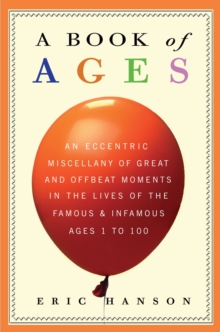 A BOOK OF AGES: AN ECCENTRIC MISCELLANY OF GREAT AND OFFBEAT MOMENTS IN THE LIVES OF THE FAMOUS AND INFAMOUS, AGES 1 TO 100

AGE ISNâ€™T JUST A NUMBERâ€”ITâ€™S A WAY OF KEEPING SCORE.
THIS IS YOUR SCORECARD.

The day we turn any age, we become contemporaries of everyone who has ever been that age, and it becomes our business to know that Bob Dylan wrote â€œBlowinâ€™ in the Windâ€ when he was twenty, Orson Welles cowrote, directed, and starred in Citizen Kane when he was twenty-five, Winston Churchill was fired from the Admiralty when he was forty and took up painting, and Jane Austen died, unmarried and mostly unknown, when she was forty-one. Knowing who did what when provides the yardstick by which to measure our own progress; itâ€™s comforting to learn that Grandma Moses didnâ€™t show her first painting until she was seventy-eight, and discouraging (but not surprising) to discover that Einstein was already smarter than you at age sixteen.

A witty, ironic collection of moments from famous lives organized by year of age from infancy to death, A Book of Ages tells you who is doing what, who is on top of the world, who is waiting for his luck to change, who is saying unkind things about whom, who is planning his revenge, who is meeting for the first time, and who Elizabeth Taylor is currently divorcing.

WHAT HAVE YOU BEEN UP TO?


From the Hardcover edition.