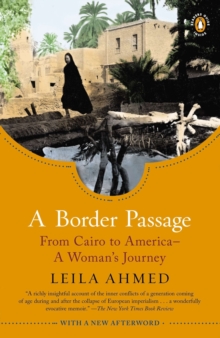 A BORDER PASSAGE: FROM CAIRO TO AMERICA--A WOMAN'S JOURNEY

Product Description An Egyptian woman's reflections on her changing homelandâ€”updated with an afterword on the Arab Spring In language that vividly evokes the lush summers of Cairo and the stark beauty of the Arabian desert, Leila Ahmed movingly recounts her Egyptian childhood growing up in a rich tradition of Islamic women and describes how she eventually came to terms with her identity as a feminist living in America. As a young woman in Cairo in the forties and fifties, Ahmed witnessed some of the major transformations of this centuryâ€”the end of British colonialism, the rise of Arab nationalism, and the breakdown of Egypt's once multireligious society. As today's Egypt continues to undergo revolutionary change, Ahmed's inspirational story remains as poignant and relevant as ever. Review "A richly insightful account of the inner conflicts of a generation coming of age during and after the collapse of European imperialism...a wonderfully evocative memoir." Ahmed, a professor of women's studies at Amherst and the author of such scholarly works as Women and Gender in Islam (Yale Univ., 1993), writes a personal memoir of her childhood in 1940s and 1950s Cairo, education in England, and teaching work in America. Like the most skillful and subtle of teachers, she entices you with what seems like an afternoon chat over tea; only when it is over do you realize how much you have learned and how fascinating the journey has been. She imparts a great deal of Egyptian history, culture, and sociology, including some background on the concept of "Arabness," as well as a brilliant introduction to the difference between the Islam of men and the Islam of women. The descriptions of her grandmother's salon will no doubt strike a chord of memory with any Western female who spent time listening to mothers, aunts, and grandmothers in the kitchen at family gatherings. A delightful read; recommended for libraries that collect in intercultural, gender, or Middle Eastern studies. â€” Library Journal As in her widely admired scholarly book Women and Gender in Islam, Ahmed addresses how historical and political forces shape personal identities, particularly those of Arab Muslim women. Here, however, the subject is Ahmed's own identity as a scholar, a woman, a Muslim and an upper-class Egyptian at home in both East and West. In elegant prose, she tells of her childhood in Cairo, her college years at Cambridge and of teaching in Abu Dhabi and America. In Ahmed's nuanced rendering, politics are not the backdrop to people's lives but their fabric. The internalization of colonial attitudes, the 1952 revolution and Arab nationalism, class issues, the effects of Zionism and the politics of gender roles are woven into her life and the lives of those around her. Most poignant is the transformation of Ahmed's disdain for her "traditional" Arabic-speaking mother, who spent her days with female relatives, into an understanding of how these women made sense of their lives. Indeed, throughout this fluid memoir, she provocatively reformulates the terms by which men, Western and Arab, have defined women through her own cross-cultural comparisons of women's communities, as when she describes the all-female Girton College (at Cambridge) as a harem, "the harem as I had lived it, the harem of older women presiding over the young." â€” Publishers Weekly From the Back Cover AS SHE JOURNEYS ACROSS CULTURES, AN EGYPTIAN WOMAN STRUGGLES TO DEFINE HERSELF In language that vividly evokes the lush summers of Cairo and the stark beauty of the Arabian Desert, Leila Ahmed tells the story of her life. This moving memoir begins with her Egyptian childhood amid the rich tradition of Islamic women, and ends with her longing to understand and to come to terms with her own identity as a feminist living in America. Growing up in Cairo in the 1940s and 1950s. Ahmed witnessed some of the major transformations of this century: the end of British colonialism, the creation of Israel, t