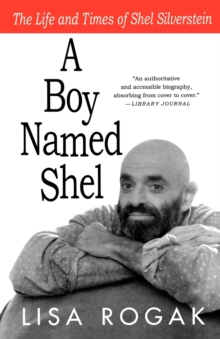 Product Description Few authors are as beloved as Shel Silverstein. His inimitable drawings and comic poems have become the bedtime staples of millions of children and their parents, but few readers know much about the man behind that wild-eyed, bearded face peering out from the backs of dust jackets. In A Boy Named Shel, Lisa Rogak tells the full story of a life as antic and adventurous as any of his creations. A man with an incurable case of wanderlust, Shel kept homes on both coasts and many places in between---and enjoyed regular stays in the Playboy Mansion. Everywhere he went he charmed neighbors, made countless friends, and romanced almost as many women with his unstoppable energy and never-ending wit. His boundless creativity brought him fame and fortune---neither of which changed his down-to-earth way of life---and his children's books sold millions of copies. But he was much more than "just" a children's writer. He collaborated with anyone who crossed his path, and found success in a wider range of genres than most artists could ever hope to master. He penned hit songs like "A Boy Named Sue" and "The Unicorn." He drew cartoons for Stars & Stripes and got his big break with Playboy. He wrote experimental plays and collaborated on scripts with David Mamet. With a seemingly unending stream of fresh ideas, he worked compulsively and enthusiastically on a wide array of projects up until his death, in 1999. Drawing on wide-ranging interviews and in-depth research, Rogak gives fans a warm, enlightening portrait of an artist whose imaginative spirit created the poems, songs, and drawings that have touched the lives of so many children---and adults. Review â€œEngaging.â€ ?The New Yorker â€œConsulting many sources, among them Silverstein's friends; radio interviews; and newspaper, journal and magazine articles, Rogak thoughtfully reconstructs the artist's life. ... An authoritative and accessible biography, absorbing from cover to cover.â€ ?Library Journal â€œ[A Boy Named Shel] offers revealing anecdotes, complete with some dirty laundry, about the prolific children's author and cartoonist.â€ ?Kirkus Reviews â€œThe strength of this biography is in leading readers back to Silverstein's art, which is, after all, where he would have us find him.â€ ?School Library Journal â€œFascinating...A Boy Named Shel is a revealing peek into the mind behind both 'Runny Babbit' and 'Freakin' at the Freakers Ball.'â€ ?Albany Times Union â€œA tribute to the unusual life of an extraordinary man.â€ ?The Daily Texan â€œLisa Rogak dives wholeheartedly into presenting the full story of media-shy Silverstein. She covers every step in his creative career, following his journey across media. Silverstein proved himself as a songwriter, a cartoonist, an author, a poet, a playwright and a screenwriter, and Rogak doesn't miss a beat.â€ ?The Daily Californian â€œFaithfully following Silverstein on his wandering and tracing his deft compartmentalizing, Rogak lifts the curtain, respectfully, on this cultural icon.â€ ?GO (AirTran Airways Inflight Magazine) â€œI didn't think any biography could do justice to one of the few honest-to-goodness geniuses of our time, a walking paradox who wore a cloak of complexity and elusiveness, but Lisa Rogak has done an exemplary job of it.â€ ?Otto Penzler, The Mysterious Bookshop â€œShel Silverstein...was a genius in a dozen genres, the last of the real Renaissance men. He loved life and lived it more intensely than most of us dare to dream. There's a surprise on every page as Lisa Rogak tells the whole untold story of this truly fabulous character.â€ ?Dr. Demento, syndicated radio personality About the Author Lisa Rogak is the author of more than forty books. Her most recent biography was The Man Behind the Da Vinci Code: An Unauthorized Biography of Dan Brown. She lives in New Hampshire. Excerpt. Â© Reprinted by permission. All rights reserved. Chapter 1When he was five years old, Shel Silverstein taught himself to draw by tracing over th