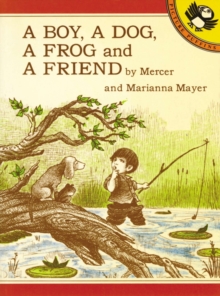 Product Description The Book includes Many Images and does not have words First came a boy and his dog. Then they found a frog. Can a new turtle be a good friend too? About the Author Mercer Mayer began writing and illustrating children's books in 1966, and since that time, he has published over 300 titles. Open almost any of the award-winning author/illustrator's books, and out may pop dragons, cuddly monsters, wonderful creatures, and endearing critters. "Most of my books are about things that happened to me when I was a little kid," says Mercer. "Now that I'm a big kid, I write about things that happen now, especially with my own children. They always help remind me of what it was like." Born in Little Rock, Arkansas, Mercer Mayer spent his childhood hunting lizards and snakes in the swamps near his home. During his teenage years, he attended the Honolulu Academy of Arts. He later received additional training at the Art Students League in New York City. Upon completion of his studies, he set out with pen and ink to write and illustrate a collection of children's books, reflecting many of the adventures he experienced as a child. In 2007, Mr. Mayer was commissioned by Laura Bush to create the artwork used for the National Book Festival held on September 29 on the National Mall. He was an honored guest to the event, giving a demonstration and autographing hundreds of books for fans who attended.