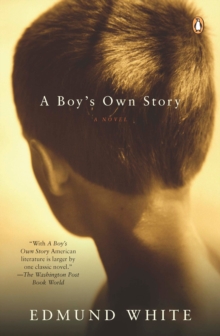 A BOY'S OWN STORY: A NOVEL

Product Description Originally published in 1982 as the first of Edmund White?s trilogy of autobiographical novels, A Boy?s Own Story became an instant classic for its pioneering portrayal of homosexuality. The book?s unnamed narrator, growing up during the 1950s, is beset by aloof parents, a cruel sister, and relentless mocking from his peers, compelling him to seek out works of art and literature as solace?and to uncover new relationships in the struggle to embrace his own sexuality. Lyrical and poignant, with powerful evocations of shame and yearning, this is an American literary treasure. Review ?With A Boy?s Own Story American literature is larger by one classic novel.? ? The Washington Post Book World ?Edmund White has crossed J. D. Salinger with Oscar Wilde to create an extraordinary novel.? ? The New York Times Book Review ?Every so often a novel comes along that is so ambitious in its intention and so confident of its voice that it reminds us what a singular and potent thing a novel can be. One of these is A Boy?s Own Story.? ? San Francisco Chronicle About the Author Edmund White, the author of thirteen books, has received, among other honors, a Guggenheim Fellowship and the Award for Literature from the American Academy of Arts and Letters. He was awarded the National Book Critics Circle Award and the Lambda Literary Award for Genet: A Biography.