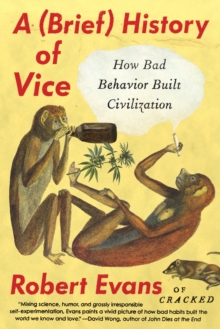 A BRIEF HISTORY OF VICE: HOW BAD BEHAVIOR BUILT CIVILIZATION

Product Description A celebration of the brave, drunken pioneers who built our civilization one seemingly bad decision at a time,Â A Brief History of ViceÂ explores a side of the past that mainstream history books prefer to hide.Â History has never been more funâ€”or more intoxicating. Guns, germs, and steel might have transformed us from hunter-gatherers into modern man, but booze, sex, trash talk, and tripping built our civilization.Â  CrackedÂ editor Robert Evans brings his signature dogged research and lively insight to uncover the many and magnificent ways vice has influenced history, from the prostitute-turned-empress who scored a major victory for womenâ€™s rights to the beer that helped createâ€”and destroyâ€”South America's first empire. And Evans goes deeper than simply writing about ancient debauchery; he recreates some of history's most enjoyable (and most painful) vices and includes guides so you can follow along at home. Youâ€™ll learn how to: â€¢Â Trip like a Greek philosopher. â€¢Â Rave like your Stone Age ancestors. â€¢Â Get drunk like a Sumerian. â€¢Â Smoke a nose pipe like a preâ€“Columbian Native American. â€œMixing science, humor, and grossly irresponsible self-experimentation, Evans paints a vivid picture of how bad habits built the world we know and love.â€â€”David Wong, author ofÂ John Dies at the End Review â€œMixing science, humor, and grossly irresponsible self-experimentation, Evans paints a vivid picture of how bad habits built the world we know and love.â€â€”David Wong, author of John Dies at the End Â  â€œEvans's goal is to investigate and illuminate the human tradition of merriment and debauchery, which he does with tact, humor, and insight.â€â€” Publishers Weekly Â  â€œAn engaging and compelling assemblage of pop culture and cultural anthropology (pop cultural anthropology?), an exploration of the growth of civilization via things that our own culture has in many ways declared taboo. This is one of the more entertaining books, fiction or nonfiction, or whatever, that you'll read this year.â€â€”Allen Adams, The Maine Edge About the Author Robert Evans is an editorial manager at Cracked.com. His articles rack up an average of sixty-four million views a year. He was a contributor to the bestsellingÂ  You Might Be a ZombieÂ andÂ  The De-Textbook. Excerpt. Â© Reprinted by permission. All rights reserved. CHAPTER 1 Â  Mother Nature: Â  History's First Bartender Â  The most important history lesson I ever learned startedwith a big white bucket of rotting fruit in the kitchen of my first apartment. Â  Â Â  I was nineteenat the time--too young to buy booze, but too old to spend my weekends sober. Itwas a conundrum. Sure, I knew people who were over twenty-one and willing tobuy me alcohol. But most of them were just as shady as you?d expect based onthe fact that they were willing to buy alcohol for teenagers. Also, I was poorenough that my options for affordable drinking were limited to six-dollarbottles of leaded vodka and, if I was really hard up, Boone's Farm. Â  Â Â  But a goodfriend of mine made beer in his kitchen, and he'd walked me through the basicchemistry of the fermentation process. I knew it started with yeast, theone-celled fungi that live in vast colonies, feast on sugar, and poop outalcohol. Brewers simply trapped yeast, a bunch of rotting sugary plant matter,and water in a container and let it all sit for a while until, eventually, beerhappened. Â  Â Â  I couldn'tafford to brew beer, though. A five-gallon batch cost upward of forty dollarsin ingredients, a fortune in teenager money. Thankfully, there was a dirtier,easier, route: I could buy a bunch of cheap fruit, mash it up, toss it into abucket with water and yeast, and let that turn into something foul butintoxicating. My friends and I called the resultant brew "hobo jug wine," andhere is the recipe we used: Â  Ingredients Â  1 five-gallon food-grade plastic bucket Â  1 length of hose, a finger's width or so Â  1 smaller bucket Â  Enough pineapples/oranges/apples/whatever fruit