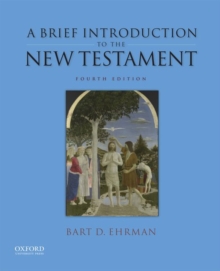 A BRIEF INTRODUCTION TO THE NEW TESTAMENT

Product Description Featuring vibrant full color throughout, A Brief Introduction to the New Testament, Fourth Edition, is a concise version of Bart D. Ehrman's best-selling The New Testament: A Historical Introduction to the Early Christian Writings, Sixth Edition. Retaining the approach of the longer textbook while condensing and simplifying much of its material, this volume looks at the New Testament from a consistently historical and comparative perspective and emphasizes the rich diversity of the earliest Christian literature. Distinctive to this study is its emphasis on the historical, literary, and religious milieux of the Greco-Roman world, including early Judaism. The text incorporates a wealth of pedagogical resources including an extensive text box program, study questions, maps, timelines, and more than eighty photos (including three photo essays). A comprehensive glossary contains more than 200 key terms; these terms appear in boldface type the first time they are used in each chapter and are also listed at the end of each chapter in which they appear. Ideal for undergraduate and seminary classes in the New Testament, Biblical Studies, and Christian Origins, A Brief Introduction to the New Testament, Fourth Edition, is an engaging and accessible introduction that encourages students to consider the historical issues surrounding these writings. A FREE 6-month subscription to Oxford Biblical Studies Online (www.oxfordbiblicalstudies.com)--a $180 value--is available with the purchase of every new copy of this text. Review "No other textbook on the market covers the complexity and depth of the field in such a comprehensive and up-to-date way while remaining accessible for beginning undergraduates."--Benjamin Dunning, Fordham University "Vintage Ehrman. Clear, incisive, succinct, and occasionally edgy, this textbook will do a lot that teachers of the New Testament want it to do."--Steven Hunt, Gordon College "Bart Ehrman has the enviable ability to write clearly and in an interesting manner that draws focused attention to his work. There isn't a finer or more readable introduction in the English language."--Michael Thompson, University of Oklahoma About the Author Bart D. Ehrman is the James A. Gray Distinguished Professor of Religious Studies at the University of North Carolina at Chapel Hill. He has written or edited more than twenty-nine books, including five New York Times best sellers. His publications include The New Testament, Sixth Edition (OUP, 2015), After the New Testament, Second Edition (OUP, 2014), The Bible (OUP, 2013), Forgery and Counterforgery (OUP, 2013), and The Orthodox Corruption of Scripture, Second Edition (OUP, 2011).