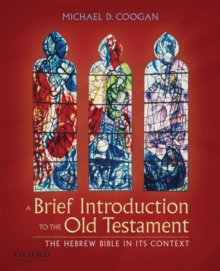 A BRIEF INTRODUCTION TO THE OLD TESTAMENT: THE HEBREW BIBLE IN ITS CONTEXT

Product Description Engaging and accessible to students from all backgrounds, A Brief Introduction to the Old Testament: The Hebrew Bible in Its Context is an updated, concise, and more pedagogical version of Michael D. Coogan's best-selling The Old Testament: A Historical and Literary Introduction to the Hebrew Scriptures (OUP, 2005). Focuses on Historical Content while also Addressing Other Interpretive Approaches Retaining the historical and literary perspective of the longer text, this concise edition is enhanced by two new introductory chapters that provide students with the context necessary to analyze the biblical texts--one on the composition of the Old Testament and one on the history and geography of the ancient Near East and how it influenced the Hebrew Bible. Relying on internal evidence, scholarly consensus, and current research, Coogan deals in detail with ancient Near Eastern sources and archaeological data. He works from a primarily historical and critical methodology but also introduces students to literary analysis and other interpretive strategies. Offering the most balanced and comprehensive introduction available, Coogan examines all the books of the Hebrew Bible and also considers additional writings from the ancient Near East. The Apocryphal / Deuterocanonical books are included in an appendix. A Brief Introduction to the Old Testament: The Hebrew Bible in Its Context is enhanced by: * Chapter introductions connecting each chapter to the preceding material and previewing the material to come * Chapter summaries that highlight key points and link each chapter to the rest of the book * Important terms, boldfaced at their first appearance and defined in a glossary of more than 100 words * Numerous strategically placed text boxes--some new to this concise edition--that offer interesting and useful supplementary information * Timelines, photos, illustrations, maps, and a four-color insert on Jerusalem in biblical times * Review questions, suggestions for further reading, annotated bibliographies at the end of each chapter, and a general bibliography * An Instructor's Manual (in both print and CD formats) and a Companion Website at www.oup.com/us/coogan that contains resources for both students and instructors Providing a nondenominational and nondoctrinal treatment, A Brief Introduction to the Old Testament offers a unique and captivating introduction to the Hebrew scriptures themselves and to how they have been--and can be--interpreted. About the Author Michael D. Coogan is Professor of Religious Studies at Stonehill College and Director of Publications for the Harvard Semitic Museum. One of the leading biblical scholars in the United States, he is editor of The New Oxford Annotated Bible, Third Edition, and is a contributor to such standard reference works as The Encyclopedia of Religion, HarperCollins Bible Dictionary, and The New Jerome Biblical Commentary. Collaborative works that he conceived and edited include The Oxford Companion to the Bible, The Illustrated Guide to World Religions, and The Oxford History of the Biblical World.