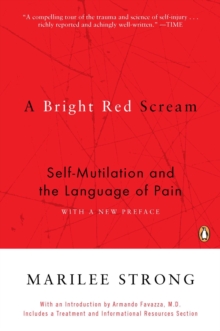 A BRIGHT RED SCREAM: SELF-MUTILATION AND THE LANGUAGE OF PAIN

Product Description "I highly recommend [A Bright Red Scream], because itâ€™s beautifully written and . . .Â soÂ candid.â€ â€”Amy Adams, star of HBO's Sharp ObjectsÂ inÂ Entertainment Weekly Self-mutilation is a behavior so shocking that it is almost never discussed. Yet estimates are that upwards of eight million Americans are chronic self-injurers. They are people who use knives, razor blades, or broken glass to cut themselves. Their numbers include the actor Johnny Depp, Girl Interrupted author Susanna Kaysen, and the late Princess Diana. Mistakenly viewed as suicide attempts or senseless masochismâ€”even by many health professionalsâ€”"cutting" is actually a complex means of coping with emotional pain. Marilee Strong explores this hidden epidemic through case studies, startling new research from psychologists, trauma experts, and neuroscientists, and the heartbreaking insights of cutters themselves--who range from troubled teenagers to middle-age professionals to grandparents. Strong explains what factors lead to self-mutilation, why cutting helps people manage overwhelming fear and anxiety, and how cutters can heal both their internal and external wounds and break the self-destructive cycle. A Bright Red Scream is a groundbreaking, essential resource for victims of self-mutilation, their families, teachers, doctors, and therapists. Review "I read a book calledÂ  A Bright Red Scream, and read about peopleâ€™s emotional release that comes with the cutting. Itâ€™s a very complicated issue, and if anyoneâ€™s curious, I highly recommend that book, because itâ€™s beautifully written and people areÂ  soÂ candid.â€ â€”Amy Adams, in Entertainment Weekly on her role in Sharp Objects "A compelling tour of the trauma and science of self-injury" â€” Time " A Bright Red ScreamÂ is thick with scientific studies, up-to-date research andâ€”most importantâ€”tender . . . portraits of real-life cutters." â€” New York Post Â  "Riveting and dynamically written, this book is an important addition to psychological literature." â€” Publisher's WeeklyÂ (starred review) "An imporessive complement to Mary Pipher's bestselling explication of the woes of adolescent girls, Reviving Ophelia." â€” Booklist " A Bright Red ScreamÂ has the hallmark of a classic work on a topic that [is] impossible to ignore."Â  â€” San Diego Tribune From the Back Cover Meet Daphne, age sixteen. There are times when she hurts so bad, "too deep for tears", that she must shed her own blood to "let out some of the hurt". There's Annie, a woman who stopped injuring herself years ago but admits that she would cut again because she loves her scars too much, loves the control they give her over her own body. And Lukas, a forty-three-year old lawyer, describes the powerful, soothing rush he gets from his self-induced wounds: "The feeling I get when the blood comes out is better than anything. It's better than drinking, it's better than any drug I've ever taken, it's better than sex". Why do some people need to inflict pain on themselves? At least two million Americans, and millions more worldwide, are cutters -- notably, the late Princess Diana. Yet, the reasons behind the need to self-mutilate are profoundly complex and largely misunderstood. Marilee Strong shatters the stereotypes and dispels the myths surrounding the phenomenon of self-mutilation and gets to the heart of the matter by way of her subjects. The voices of cutters themselves, combined with Strong's own astute observations, make for an unparalleled exploration of the disorder that has been called the "addiction of the nineties". About the Author Marilee Strong has written for the Atlanta Constitution and San Diego Union. The recipient of a Pulitzer Fellowship to report on child victims of war trauma, she has won a National Headliner Award and a Society for Professional Journalists Excellence Award. She lives in Oakland, California.