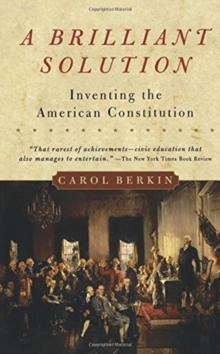 Product Description A rich narrative portrait of post-revolutionary America and the men who shaped its political future Â  Though the American Revolution is widely recognized as our nation's founding story, the years immediately following the warâ€”when our government was a disaster and the country was in a terrible crisisâ€”were in fact the most crucial in establishing the country's independence. The group of men who traveled to Philadelphia in the summer of 1787 had no idea what kind of history their meeting would make. But all their ideas, arguments, and compromisesâ€”from the creation of the Constitution itself, article by article, to the insistence that it remain a living, evolving documentâ€”laid the foundation for a government that has surpassed the founders' greatest hopes. Revisiting all the original historical documents of the period and drawing from her deep knowledge of eighteenth-century politics, Carol Berkin opens up the hearts and minds of America's founders, revealing the issues they faced, the times they lived in, and their humble expectations of success. Review PRAISE FOR A BRILLIANT SOLUTION "A Brilliant Solution is that rarest of achievements-civic education that also manages to entertain. . . . A dramatic, well-informed account."-The New York Times Book Review "Deserves to be read alongside Max Farrand's classic The Framing of the Constitution of the United States." --Columbus Dispatch From the Inside Flap "Carol Berkin has now written the liveliest and most concise account yet of the adoption of the Constitution. With unflagging verve, she sweeps readers along as she introduces the players, canvasses the issues, and explains the critical decisions. And she manages the neat and difficult trick of presenting the framers of the Constitution as living, breathing, calculating politicians while simultaneously capturing the deep seriousness of their debates and achievements. The result is a sparkling, fast-paced, and always engaging introduction to the modern world's first great exercise in constitutional invention."-- Jack N. Rakove, Pulitzer Prize-winning author of James Madison and the Creation of the American Republic "A story all modern Americans need to know--the exciting and true tale of our nation's origins, as narrated by one of our best historians."--Professor Mary Beth Norton, Cornell University From the Back Cover "" If you've ever wondered how a group of 18th-century soldiers , farmers , lawyers and businessmen managed to come up with our miracle of a Constitution . . . Berkin explains it in her exciting re-creation."-The Star-Ledger (Newark) We know the story of the American Revolution, from the Declaration of Independence to Cornwallis's defeat. But our first government ended in disaster, leaving the budding country in a terrible crisis. When a group of men traveled to Philadelphia in the summer of 1787 to save a nation in danger of collapse, they had no great expectations for the meeting that would make history and lead to a constitution and a government that have outlasted their highest hopes. Revisiting original documents and using her deep knowledge of eighteenth-century history and politics, Carol Berkin reveals the human strength behind our country's great constitution. "Take s a f re s h l ook at the much-trampled ground of Philadelphia in 1787. Drops the, 'It all came down to us written on a stone tablet' pose and goes into all the confusion, paranoia and luck involved."-MOLLY IVINS, The Seattle Times C A R O L B E R K I N is a professor of American History at Baruch College and the Ph.D. program in History at the Graduate Center of the City University of New York. The author of five books, Berkin was a commentator for the PBS documentary Benjamin Franklin. About the Author Carol Berkin is a professor of American History at Baruch College and the Ph.D. Program in History at the Graduate Center of the City University of New York. She has written five scholarly boo