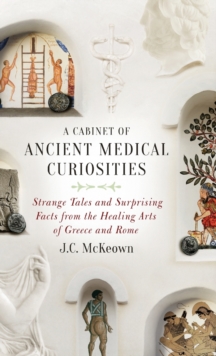 A CABINET OF ANCIENT MEDICAL CURIOSITIES: STRANGE TALES AND SURPRISING FACTS FROM THE HEALING ARTS OF GREECE AND ROME

Product Description There are few disciplines as exciting and forward-looking as medicine. Unfortunately, however, many modern practitioners have lost sight of the origins of their discipline. A Cabinet of Ancient Medical Curiosities aspires to cure this lapse by taking readers back to the early days of Western medicine in ancient Greece and Rome. Quoting the actual words of ancient authors, often from texts which have never before been translated into English, J. C. McKeown offers a fascinating glimpse at the origins of surgery, gynecology, pediatrics, pharmacology, diet and nutrition, and many other fields of medicine. This book features hundreds of passages from Greek and Roman authors, with gentle guidance from McKeown, giving a vividly direct picture of the ancient medical world, a world in which, for example, a surgeon had to be strong-minded enough to ignore the screams of his patient, diseases were assumed to be sent by the gods, medicine and magic were often indistinguishable, and no qualifications were required before setting oneself up as a doctor. On the other hand, McKeown reveals that some ancient medical attitudes were also surprisingly similar to our own. Beyond the practice of medicine, McKeown highlights ancient views on familiar topics, such as medical ethics and the role of the doctor in society. A fascinating exploration of the bizarre - and sometimes grotesque - medical beliefs of the past, A Cabinet of Ancient Medical Curiosities will delight anyone with an interest in the history of medicine or the ancient world. Review "McKeown has translated a wide variety of ancient sources on medicine and compiled them in an accessible and affordable book, which could benefit a student of ancient medicine who is not fluent in Greek or Latin. The only comparable collection of ancient medical sources in translation is James Longrigg's more limited and significantly more sober Greek Medicine from the Heroic to the Hellenistic Age: A Source Book (1998), and it seems there is room for more such anthologies with the proliferation of university courses on the history of medicine. If used with care (by avoiding the preface and random comments), McKeown's book presents a stimulating snapshot of the many visual and written sources available to the historian of medicine." --Winston Black, Bryn Mawr Classical Review "As well organized as it is erudite, the compendium tilts toward classics enthusiasts, but there's still plenty of material to amaze an audience outside the ivory tower." -- Publishers Weekly About the Author J.C. McKeown is Professor of Classics at the University of Wisconsin-Madison, coeditor of the Oxford Anthology of Roman Literature, and author of Classical Latin: An Introductory Course, A Cabinet of Roman Curiosities, and A Cabinet of Greek Curiosities.