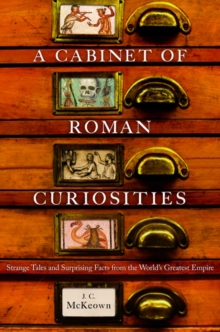 A CABINET OF ROMAN CURIOSITIES: STRANGE TALES AND SURPRISING FACTS FROM THE WORLD'S GREATEST EMPIRE

Product Description Here is a whimsical and captivating collection of odd facts, strange beliefs, outlandish opinions, and other highly amusing trivia of the ancient Romans. We tend to think of the Romans as a pragmatic people with a ruthlessly efficient army, an exemplary legal system, and a precise and elegant language. A Cabinet of Roman Curiosities shows that the Romans were equally capable of bizarre superstitions, logic-defying customs, and often hilariously derisive views of their fellow Romans and non-Romans. Classicist J. C. McKeown has organized the entries in this entertaining volume around major themes--The Army, Women, Religion and Superstition, Family Life, Medicine, Slaves, Spectacles--allowing for quick browsing or more deliberate consumption. Among the book's many gems are: ? Romans on urban living: The satirist Juvenal lists "fires, falling buildings, and poets reciting in August as hazards to life in Rome." ? On enhanced interrogation: "If we are obliged to take evidence from an arena-fighter or some other such person, his testimony is not to be believed unless given under torture." (Justinian) ? On dreams: Dreaming of eating books "foretells advantage to teachers, lecturers, and anyone who earns his livelihood from books, but for everyone else it means sudden death" ? On food: "When people unwittingly eat human flesh, served by unscrupulous restaurant owners and other such people, the similarity to pork is often noted." (Galen) ? On marriage: In ancient Rome a marriage could be arranged even when the parties were absent, so long as they knew of the arrangement, "or agreed to it subsequently." ? On health care: Pliny caustically described medical bills as a "down payment on death," and Martial quipped that "Diaulus used to be a doctor, now he's a mortician. He does as a mortician what he did as a doctor." For anyone seeking an inglorious glimpse at the underside of the greatest empire in history, A Cabinet of Roman Curiosities offers endless delights. Review "This cabinet is as true to the Roman world as the highbrow history it eschews. Whether we use it as a gift to friends or light reading for ourselves, the readers' understanding of the ancients will be enriched by the stories they take away from this treasure chest of curiosities." -- Bryn Mawr Classical Review "Zestful. This book could persuade the most history-hating student to fall in love with ancient Rome. It's a highly entertaining read." -- Sunday Times "Entertaining" -- Times Literary Supplement "To be enjoyed as a lighthearted Romanophile outing." -- UNRV.com "The esteemed classicist J.C. McKeown shows in his Cabinet of Roman Curiosities, the ancients were as passionate, opinionated, and curious as we are today-if not more so. A madcap smorgasbord of the ancient world."-- The Daily Beast "Readers' understanding of the ancients will be enriched by the stories they take away from this treasure chest of curiosities."-- Bryn Mawr Classical Review About the Author J. C. McKeown is Professor of Classics at the University of Wisconsin, Madison, and the author of Ovid's Amores.