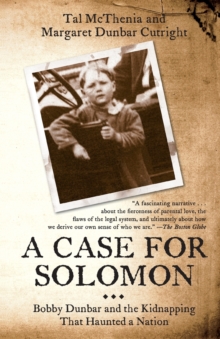 A CASE FOR SOLOMON: BOBBY DUNBAR AND THE KIDNAPPING THAT HAUNTED A NATION

Product Description The spellbinding story of one of the most celebrated kidnapping cases in American historyâ€”the kidnapping of Bobby Dunbarâ€”and a haunting family mystery that took almost a century to solve. THE MOST NOTORIOUS KIDNAPPING CASE IN AMERICAN HISTORY In 1912, four-year-old Bobby Dunbar went missing in the Louisiana swamps. After an eight-month search that electrified the country and destroyed Bobbyâ€™s parents, the boy was found, filthy and hardly recognizÂ­able. A wandering piano tuner was arrested and charged with kidnappingâ€” a crime then punishable by death. But when a destitute single mother came forward from North Carolina to claim the boy as her son, not the lost Bobby Dunbar, the case became a high-pitched battle over custodyâ€”and identityâ€”that divided the South. A gripping historical mystery, A Case for Solomon chronicles the epic century-long effort to unravel the startling truth. Review â€œRarely do nonfiction books engage me so deeply and satisfyingly as . . . A Case for Solomon has. Exhaustively researched . . . [the book] reads like fiction.â€ -- Elissa Schappel ? Vanity Fair â€œA thoughtful look at the elusiveness of truth and the fluidity of identityâ€¦ Itâ€™s difficult not to empathize with both sides of this case, as everyone loses somethingâ€”particularly the child caught in the middle.â€ -- Publisher's Weekly " A Case For Solomon is a fascinating tale of an American changeling -- a little boy lost to the Louisiana swamps, only to be conjured back by headlines and a mother's agony. Within the life of Bobby Dunbar, a man who was a mystery even to himself, Tal McThenia and Margaret Cutright have uncovered a dramatic case of families caught between grief, injustice, and the desperate will to believe." -- Paul Collins, author of The Murder of the Century "A Case for Solomon is haunting and unforgettable. It swept me up like no other book I've read in a long time. It is a mystery story finally solved after a hundred years, but it's also a profound and heartbreaking examination of identity and loss told by writers whose hard-won research and narrative gifts are plain on every page. The exotic settings, the characters whose love redeems as well as destroys, a plot that is downright biblical...and in the end a little boy with arms outstretched and this question on his lips: Who am I?" -- John Ed Bradley, author of Tupelo Nights and It Never Rains in Tiger Stadium â€œ A Case for Solomon can easily be read as a kidnapping mystery or a legal thriller or a saga of class privilege or a lively indictment of the deadly shenanigans when the media circus comes to town. To me, itâ€™s a tragic accounting of the abuses inherent in our confidence about what's in the best interests of a child. And all of it is evidence of the power of nonfiction--fact after astonishing fact.â€ -- Adrian Nicole LeBlanc, author of Random Family: Love, Drugs, Trouble and Coming of Age in the Bronx "a solid read that provides plenty of food for thought." -- Library Journal â€œ A Case For Solomon is a thoroughly researched and detailed work of history that lets its mystery unfold with the restraint and craft of a detective story. Though as suspenseful and dark as any good thriller... it wonders, through the telling of the shocking tale, at greater questions - about the nature of identity, and family, and to what lengths people might go to avoid knowing a terrible truth." -- The Times-Picayune "The saga related in the book is so mind-bending that some readers might need to digest certain passages about family connections more than once, as I felt compelled to do. It is worth the effort." -- The Atlanta Journal-Constitution "A fascinating narrative about an ostensible kidnapping and a 90-year case of mistaken identity, fully steeped in the flavor of the era. [ A Case for Solomon] is a narrative about the fierceness of parental love, the flaws of the legal system, and ultimately about how we derive our own sense of who we are." -- The Boston Glob