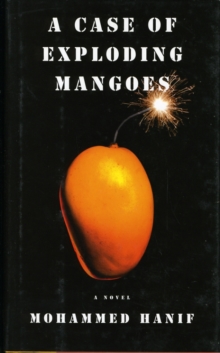 A CASE OF EXPLODING MANGOES

Product Description A first novel of the first orderâ€”provocative, exuberant, wickedly cleverâ€”that reimagines the conspiracies and coincidences leading to the mysterious 1988 plane crash that killed Pakistanâ€™s dictator General Zia ul-Haq. At the center is Ali Shigri: Pakistan Air Force pilot and Silent Drill Commander of Fury Squadron. His father, one of Ziaâ€™s colonels, committed suicide under suspicious circumstances. Ali is determined to understand what or who pushed his father to such desperationâ€”and to avenge his death. What he quickly discovers is a snarl of events: Americans in Pakistan, Soviets in Afghanistan, dollars in every hand. But Ali remains patient, determined, a touch world-weary (â€œYou want freedom and they give you chicken kormaâ€), and unsurprised at finding Zia at every turn. He mounts an elaborate plot for revenge with an ever-changing crew (willing and not) that includes his silk-underwear-and-cologne-wearing roommate; a hash-smoking American lieutenant with questionable motives; the chief of Pakistanâ€™s secret police, who mistakenly believes heâ€™s in cahoots with the CIA; a blind woman imprisoned for fornication; Uncle Starchy, the squadronâ€™s laundryman; and, not least of all, a mango-besotted crow. General Ziaâ€”devout Muslim and leering admirer of non-Muslim cleavageâ€”begins every day by asking his chief of security: â€œWhoâ€™s trying to kill me?â€ and the answer lies in a conspiracy trying its damnedest to happen . . . Intrigue and subterfuge combine with misstep and luck in this darkly comic book about love, betrayal, tyranny, familyâ€”and a world that unexpectedly resembles our own. Amazon.com Review : On August 17, 1988, Pak One, the airplane carrying Pakistani dictator General Zia and several top generals, crashed, killing all on board --and despite continued investigation, a smoking gun--mechanical or conspiratorial--has yet to be found. Mohammed Hanif's outrageous debut novel, A Case of Exploding Mangoes, tracks at least two (and as many as a half-dozen) assassination vectors to their convergence in the plane crash, incorporating elements as diverse as venom-tipped sabers, poison gas, the curses of a scorned First Lady, and a crow impaired by an overindulgence of ripe mangoes. The book has been aptly compared to Catch-22 for its hilarious (though not quite as madcap) skewering of the Pakistani military and intelligence infrastructure, but it also can trace its lineage to Don DeLillo, doing for Pakistan what Libra did for JFK conspiracy theory, and Kafka's The Trial, with its paranoid-but-true take on pathological bureaucracy. Recent events pushing Pakistan into the worst kind of headlines make A Case of Exploding Mangoes a timely and entertaining read, and when a mysterious bearded man called "OBL" makes an appearance at a Fourth of July party for U.S. military brass, we're coolly reminded of the fickleness of opportunistic policy in unpredictable lands. -- Jon Foro Mohammed Hanif on his experience in the Pakistan Air Force Academy Once upon a time, when I was eighteen, I found myself locked up in Pakistan Air Force Academy's cell along with my friend and partner-in-crime, Khalid Saifullah. We had thought we were doing charity work but the Academy officers obviously didn't share our ideals. We had been caught trying to help another classmate pass his chemistry exam, something he had failed to do twice already and this was his last chance to save himself from being expelled. The logistics of our rescue effort involved a wireless set improvised in the Sunday Hobbies Club, a microphone concealed in a crap bandage around the left elbow of our academically challenged friend, and a Sanyo FM radio receiver. We were running our operation from the roof top of a building next to the examination hall. We were caught red-handed whispering reversible chemical equation into the transistor. We were in breach of every single standard operating procedure in the Academy rule book, and faced certain expulsion. We had