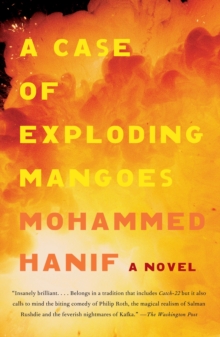 A CASE OF EXPLODING MANGOES

Product Description A Washington Post, Rocky Mountain News, Boston Globe Best Book of the Year Intrigue and subterfuge combine with bad luck and good in this darkly comic debut about love, betrayal, tyranny, family, and a conspiracy trying its damnedest to happen. Ali Shigri, Pakistan Air Force pilot and Silent Drill Commander of the Fury Squadron, is on a mission to avenge his father's suspicious death, which the government calls a suicide.Ali's target is none other than General Zia ul-Haq, dictator of Pakistani. Enlisting a rag-tag group of conspirators, including his cologne-bathed roommate, a hash-smoking American lieutenant, and a mango-besotted crow, Ali sets his elaborate plan in motion. There's only one problem: the line of would-be Zia assassins is longer than he could have possibly known. Review â€œAn insanely brilliant, satirical first novel . . . Belongs in a tradition that includes Catch-22, but it also calls to mind the biting comedy of Philip Roth.â€â€” The Washington Post"A brilliant debut. . . . Exceptional. . . . The detail is rich, the prose resonant. Grade A."â€” Rocky Mountain Newsâ€œLike Catch-22, it is best understood as a satire of militarism, regulation and piety.... Hanif has written a historical novel with an eerie timeliness.â€â€” The New York Times Book Reviewâ€œGlobal satire with a savage bite. . . . Richly imagined.â€â€” The Miami Heraldâ€œHanifâ€™s book is sexy, subversive, and magical.... Entertaining and original.â€ â€” Slateâ€œFascinating.... It sardonically examines the workings of the Pakistani state, which comes off like a Third World Brazil imagined by Raymond Chandler. What really drives Mangoes, however, is Hanifâ€™s sharp writing and considerable wit.â€â€” The Village Voiceâ€œThere are many reasons to read this excellent novel, and one for which it should be celebrated: Hanif has found in Zia a veritable Homer Simpson of theocratic zealotry . . . The inevitable comparison here is to Dr. Strangelove, and just as the Kubrick film crystallized the absurdities of nuclear escalation into an archetypal cast of idiots-who-run-the-world, Mangoes provides the necessary update.â€â€” New York Observerâ€œWitty, elegant, and deliciously anarchic. Hanif has a lovely eye and an even better ear.â€â€”John le CarrÃ©â€œHanif confidently tackles â€˜the biggest cover-up in aviation history since the last biggest cover-up,â€™ bringing absurdist humor and surprising warmth to his story.â€â€” Entertainment Weeklyâ€œFunny, subversive, erotic, and sad.Â Anyone thinking of applying for the job of unhinged, religious dictator should read it first.â€ Â Â Â â€”Mark Haddon, author of The Curious Incident of the Dog in the Night-timeâ€œUnputdownable and darkly hilarious . . . Mohammed Hanif is a brave, gifted writer. He has taken territory in desperate need of satireâ€“General Zia, the military, Pakistan at the time of the Soviet-Afghan warâ€“and made it undeniably his own.â€â€”Mohsin Hamid, author of The Reluctant Fundamentalist â€œA sure-footed, inventive debut that deftly undercuts its moral rage with comedy and deepens its comedy with moral rage . . . The novel has less in common with the sober literature of fact than it does with Latin American magical realism (especially novels about mythic dictators such as Gabriel GarcÃ­a MÃ¡rquezâ€™s Autumn of the Patriarch) and absurdist military comedy (like Joseph Hellerâ€™s Catch-22). Hanif adopts a playful, exuberant voice, as competing theories and assassination plots are ingeniously combined and overlaid.â€â€” Kirkus Reviewsâ€œPakistanâ€™s ongoing political turmoil adds a piquant edge to this fact-based farce . . . Hanifâ€™s depiction of military foibles recalls the satirical wallop of Catch-22. [He brings] heft to this sagely absurd depiction of his homelandâ€™s history of political conspiracies and corruption.â€â€” Publishers Weekly â€œEntertaining and illuminating . . . Hanif has crafted a clever black comedy about military culture, love, tyranny, family, and the events that eventually brought us to September 11, 2001.â€â€” Booklist About the Autho