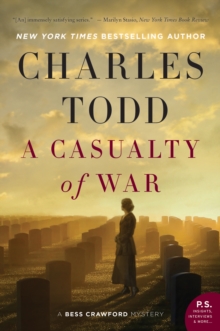 Product Description From New York Times bestselling author Charles Todd comes a haunting tale that explores the impact of World War I on all who witnessed itâ€”officers, soldiers, doctors, and battlefield nurses like Bess Crawford. Though the Great War is nearing its end, the fighting rages on. While waiting for transport back to her post, Bess Crawford meets Captain Alan Travis from the island of Barbados. Later, when heâ€™s brought into her forward aid station disoriented from a head wound, Bess is alarmed that he believes his distant English cousin, Lieutenant James Travis, shot him. Then the Captain is brought back to the aid station with a more severe wound, once more angrily denouncing the Lieutenant as a killer. But when it appears that James Travis couldnâ€™t have shot him, the Captainâ€™s sanity is questioned. Still, Bess wonders how such an experienced officer could be so wrong. On leave in England, Bess finds the Captain strapped to his bed in a clinic for brain injuries. Horrified by his condition, Bess and Sergeant Major Simon Brandon travel to James Travisâ€™s home in Suffolk, to learn more about the baffling relationship between these two cousins. Her search will lead this smart, capable, and compassionate young woman into unexpected danger, and bring her face to face with the visible and invisible wounds of war that not even the much-longed for peace can heal. Review â€œ A Casualty of War is another masterful work in this series, and I cannot recommend it enough.â€ (Bookreporter.com) â€œToddâ€™s meticulous research... illustrates the toll the war has taken on the battle-weary military as well as the nurses and doctors, the sacrifices of the residents, [and] the citizensâ€™ valiant struggle to maintain a sense of normalcy. . . . . A vivid and personal look at WWI.â€ (SouthFlorida.com) â€œIntensely personal, as all great stories should be.â€ (Anne Perry, Internationally Bestselling Author) â€œHarsh period attitudes toward traumatic stress and the exhaustion of a long war add poignancy to Toddâ€™s satisfying puzzle of identity and inheritance.â€ ( Publishers Weekly) â€œ A Casualty of War isÂ [Charles] Toddâ€™s strongest war book...â€ (Washington Times) â€œ[Readers] will love the heroine for her courage and determination.â€ ( Kirkus Reviews) â€œThe latest Crawford mystery is rich in character and period detail, with a solidly constructed story that should keep readers immersed in the action.â€ ( Booklist) â€œAs always in this immensely satisfying series, Todd heightens the mystery by setting it within a war-shattered world of battered villages, barren farms and broken people.â€ (Marilyn Stasio, New York Times Book Review on THE SHATTERED TREE) Praise for The Shattered Tree: â€œAdmirable, courageous and occasionally reckless, Bess ranks among the best of fictional amateur sleuths. [Todd] again creates a thought-provoking novel that evokes the terrors and suspicions of war.â€ (Richmond Times-Dispatch) â€œA superb whodunitâ€”just when you think you have it figured out, Todd throws a curveâ€”and a moving evocation of a world at war.â€ ( Richmond Times-Dispatch) From the Back Cover Though the Great War is nearing its end, the fighting still rages on. Waiting for her transport north, nurse Bess Crawford meets Captain Alan Travis, an Englishman whose branch of the Travis family made its fortune on the Caribbean island of Barbados. Then, at the beginning of November, Captain Travis is brought into Bessâ€™s forward aid station disoriented from a head wound. He insists that the man who shot him was an English officerâ€”a distant cousin named James Travisâ€”and asks for Bessâ€™s help finding him. Her inquiries in the captainâ€™s sector about James lead nowhere. Days later, the captain is severely wounded, and again he accuses James of shooting him. But Bess has been told that James couldnâ€™t possibly have shot his cousin, which brings Alan Travisâ€™s sanity into question. As the war comes to a bloody end, Bess is given leave, and in an English clinic for brain injurie