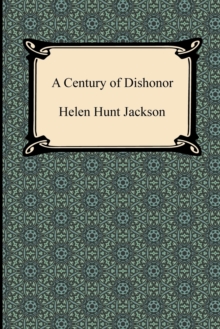 A CENTURY OF DISHONOR

Helen Hunt Jackson (1830-1885) was an American writer who most widely became famous as an activist to improve United States government treatment of Native Americans. In 1879 her interests turned to the Native Americans after hearing a lecture in Boston by Standing Bear, the Ponca Chief. He described the forceful removal of the Ponca from their reservation in Nebraska. Moved by the issues presented by Standing Bear, Hunt learned about the government defaulting on treaties, the removal of Indians to reservations, and the Indian Wars. Soon after Standing Bear's speech, she became an activist, investigating and publicizing government misconduct, circulating petitions, raising money, and writing letters to "The New York Times" on behalf of the Ponca. She gained the widest exposure with her novel, "Ramona", dramatizing the ill treatment by the US government of Native Americans in Southern California. "A Century of Dishonor", published in 1881, was a direct response to the adverse effect of government actions towards the Native Americans. A copy was sent to each member of the US Congress.