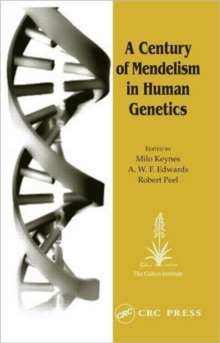 A CENTURY OF MENDELISM IN HUMAN GENETICS (FRONTIERS S)

Product Description In 1901 William Bateson, Professor of Biology at Cambridge, published a renewed version of a lecture which he had delivered the year before to the Royal Horticultural Society in London (reprinted in the book as an appendix). In this lecture he recognized the importance of the work completed by Gregor Mendel in 1865, and brought it to the notice of the scientific world. Upon reading Bateson's paper, Archibald Garrod realized the relevance of Mendel's laws to human disease and in 1902 introduced Mendelism to medical genetics. The first part of A Century of Mendelism in Human Genetics takes a historical perspective of the first 50 years of Mendelism, including the bitter argument between the Mendelians and the biometricians. The second part discusses human genetics since 1950, ending with a final chapter examining genetics and the future of medicine. The book considers the genetics of both single-gene and complex diseases, human cancer genetics, genetic linkage, and natural selection in human populations. Besides being of general medical significance, this book will be of particular interest to departments of genetics and of medical genetics, as well as to historians of science and medicine. About the Author Milo Keynes, A. W. F. Edwards, Robert Peel