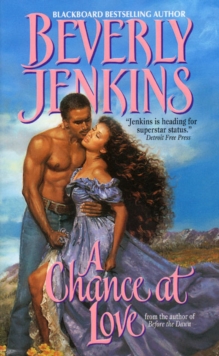 A CHANCE AT LOVE

Product Description Loreli Winters never imagined she'd end up a "mail-order bride" in middle-of-nowhere Kansas -- until the two adorable orphan nieces of a dusky dream named Jake Reed beg her to be their new "mama." And one look at the dark, devastatingly handsome man is enough to entice her to abandon her California plans and stay put for a while in this one-horse frontier town. Strong, sensible Jake was hoping for a wife to help him raise his girls, but Loreli may be more than he can handle. He can't stop wondering what it would be like to hold the fiery enchantress close and kiss her deeply. Surely he could never compete with the sophisticated gents she has known, yet he intends to try. But will his honest passion be enough to take a chance on a long-shot called love? About the Author Beverly Jenkins is the recipient of the 2018 Michigan Author Award by the Michigan Library Association, the 2017 Romance Writers of America Lifetime Achievement Award, as well as the 2016 Romantic Times Reviewersâ€™ Choice Award for historical romance. She has been nominated for the NAACP Image Award in Literature, was featured in both the documentaryÂ Love Between the CoversÂ and onÂ CBS Sunday Morning. Since the publication ofÂ Night SongÂ in 1994, she has been leading the charge for inclusive romance, and has been a constant darling of reviewers, fans, and her peers alike, garnering accolades for her work from the likes ofÂ The Wall Street Journal,Â People Magazine, and NPR. To read more about Beverly, visit her at www.BeverlyJenkins.net. Â